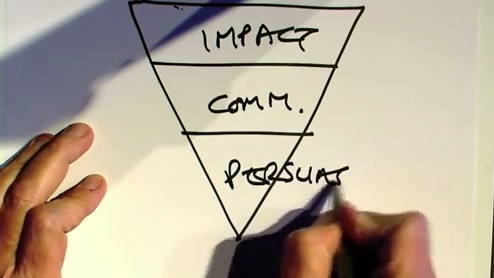 Yesterday, on various blogs I saw two "commercials," that were each, really 1/3 of a commercial. One was nominally for Dell and was, I'll admit, mildly entertaining. The other was a four or five minute affair and was for Audi. It featured a couple million dollars worth of talent, including Julia-Louise Dreyfus and Bryan Cranston.

If you buy Dave Trott's thesis (which I do) that all purposeful communications must contain three elements: 1) Impact, 2) Communication and 3) Persuasion, these two commercials are merely impactful.

They don't even make a stab at persuading.

Somewhere along the way, this became acceptable. This became "award winning." And standards like "effectiveness" became pejoratives and disparaged.

I date this bifurcation to the rise of "direct marketing." People in traditional welcomed the rise of direct marketing and said, in essence, "someone else will do the hard, dirty job of persuasion and selling. All we have to do is be "creative."

They excised everything "commercial" from commercials.

Commercials became as vapid as the worst of fashion advertising. A pretty woman with a bottle.

Frankly, it disgusts me.

The glib and non-sensical masquerading as creative disgusts me.

The holier-than-thou airs people put on. "I would never put a price in my ad."

Go back to Bernbach.

Go back to Scali McCabe.

Or Ammirati and Puris.

They did complete ads. Ads that got your attention. Told you something important. And persuaded you to act.

Arthur Miller described Willy Loman as a man who tried to conquer the world with "a handshake and a smile."


Posted by george tannenbaum at 8:01 AM