Uncle Slappy and Aunt Sylvie left yesterday, returning to Boca after having stayed with my wife and I for almost three weeks. They came up for Rosh ha-Shanah and originally intended to leave the day after Yom Kippur—ten days later. But Hurricane Matthew interfered and they extended their stay.

They’re pushing 89 now, and while they’re well and hale, I’m smart enough to realize that they won’t be around forever. So, as much as they begin to rub my goat the wrong way after a while, and as much as our 1,500 square begins to feel awfully crowded before long, well, I count to ten and grin and bear it. Because like I’ve said so many times before, Aunt Sylvie and Uncle Slappy are not getting any younger.

I had a boatload of work to do this weekend. Work that demanded quiet and concentration and long-stretches of “alone-time.” Of course, my wife had other plans. As did Uncle Slappy and Aunt Sylvie.

On Saturday, at my distaff’s behest, we headed to that great Jewish institution on the Upper West Side: Shun Lee West for dinner. I had gotten up at four Saturday morning to put in a few hours of writing, but I feared, I was not even half-way finished.

We sat down to dinner and had the conversation Jews have at almost every meal.

“You ordered too much,” Aunt Sylvie said.

“Tell them we don’t need the prawns,” added Uncle Slappy.

But the food came—served by obsequious Chinese men in dark red shirts and black pants and vests, matching the décor. In short order, with a flurry of be-chop-sticked hands, the entirety was gone, save for one clump of broccoli that was leftover, just to show we had some restraint. 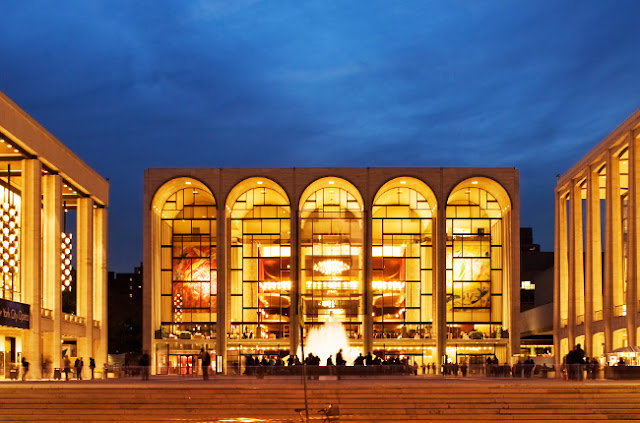 Dinner over, the four of us walked over to the Metropolitan Opera to hear Rossini’s Opera Buffa—a “drama giocoso,” a play with jokes, “The Italian in Algiers.”

While my tastes sometimes run to the gotterdamurung-ing of Richard Wagner—where the whole world is coming to a fiery end virtually every twenty minutes, the Rossini was frothy and funny and the old man stayed awake for its entirety. Score one for Rossini.

Uncle Slappy has this to say about opera, a quip I have appropriated as my own: “After Wagner, everything else, even a root canal, is a sitcom.” Nothing you’re likely to see or do in your life demands more sitzfleisch that Wagner—even the writing I continued at midnight when I returned to my apartment.

Uncle Slappy saw me hacking away at the keyboard as he readied himself for bed.

“You work too hard, boychik.”

“I know,” I answered stupidly, “I haven’t figured out how not to.”

He gave me a kiss goodnight on the forehead and gripped my left shoulder.

You don’t always appreciate wisdom when you hear it, but Uncle Slappy, as usual struck a chord, and I called it a night at around 3AM. 80% done. 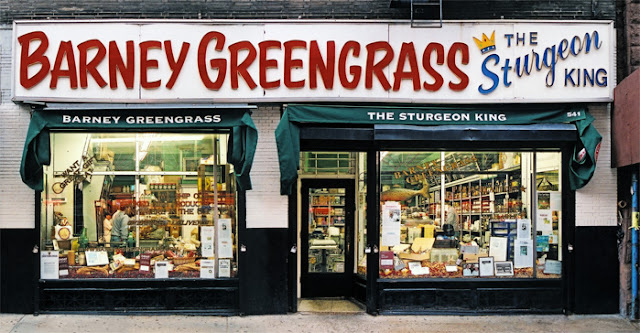 The next morning, I was up after just three hours sleep at 6. I had promised Uncle Slappy brunch at Barney Greengrass “The Sturgeon King,” and I wanted to not have work hanging over me any more.

By nine I was done, and the two of us got into a yellow cab and found a table at the venerable deli. 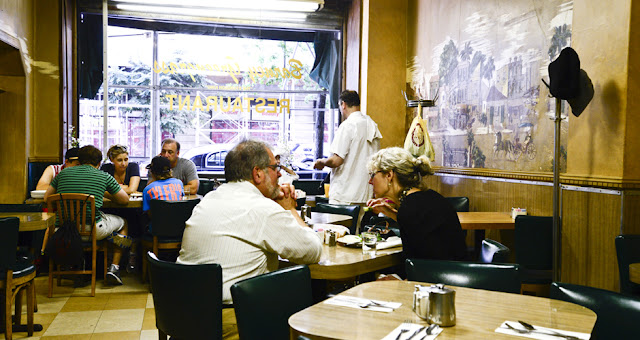 “The décor has stayed the same for 50 years,” Uncle Slappy said upon entering the joint. “The wallpaper they don’t know how to change,” he continued, “the prices, they keep up to date.”

In short order, one of the last Jewish waiters in New York came over to take our order.

“On an onion bagel dark toasted,” the old man began, “I’ll have belly lox, and onion and light butter.”

The waiter was startled. No one orders belly lox anymore. Everything has gone upscale even lox. Today people order the less-salty Nova Scotia Salmon.

“You mean Novie,” the waiter corrected.

“No, I mean lox. Belly lox. I haven’t had a real lox and bagel since it went out of vogue. I am at the world’s epicenter of Jewish fish and I want no more effete, affected fish. I want belly lox.”

“It’s salty,” he said, as if he had a blood-pressure monitor in his three-pocket apron.

The waiter laughed at that and returned in ten minutes with the sandwich exactly as the old man ordered it.

He closed his eyes and seemed to stop breathing.

Finally, he returned from heaven to earth.

“Perfect, this is,” he said, foisting a bite on me. It was indeed perfect.

“Why have we done this to ourselves? Making everything so healthy that nothing anymore has any flavor? For now on, I am 89, I eat lox. Belly lox.”

We finished our sandwiches, bought two black and white cookies for the cab ride home and then picked up Aunt Sylvie and my wife. The four of us drove to LaGuardia for their return flight home.

“You’ll be ok,” I asked after we hugged and kissed goodbye.

“We’ll be ok,” the old one answered. “With that lox in my stomach,” he said kissing me again, “what could possibly go wrong.”

We watched the two of then walk slowly into the giant airport and disappear amid the crowds.

I had a craving for lox. Belly lox.
Posted by george tannenbaum at 10:44 PM