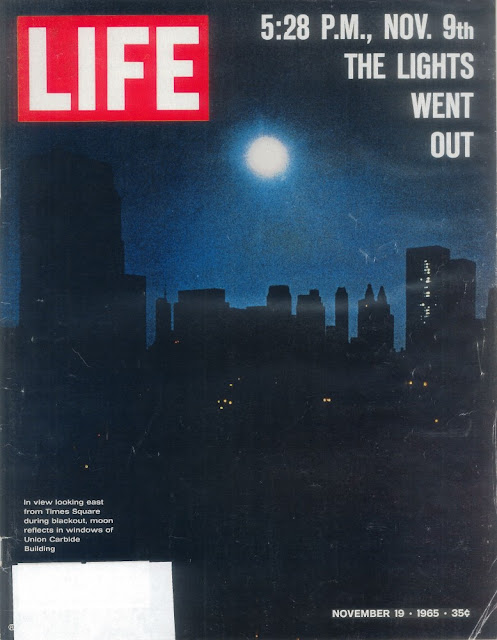 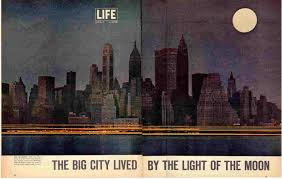 This weekend's short and un-riotous blackout on New York's Upper West Side, sent me back. I thought not of the 1977 blackout exactly 42 years ago, when looting, arson and violence were endemic, but back to the first big blackout I lived through.


That blackout happened at around 5:30 PM on November 9th, 1965 and effected over 30 million people Ontario, Canada, New York, New Jersey, Connecticut, Massachusetts, New Hampshire, Vermont and Pennsylvania. The lights were out nearly 13 hours.

It seemed, at least to this seven-year-old boy, a steadier time back in 1965 than the world seems today. It never occurred to me that the lights could go out. Life seemed more count-on-able then.

I was at home in the suburbs of New York with my brother and sister. We were probably watching TV and waiting for our virago of a mother to make what she called dinner. Usually a block of vegetables frozen into a square, beans sugared-and-canned, and a hotdog or two. The fetishization of food had not yet begun in 1965. Though we ate worse, these were better times.

The lights went out and it was dark. The phone rang and my mother answered it. It was my old man. He would be sleeping in his office, he said. Even though he was just 37, he was two years away from his first heart-attack and probably didn't have it in him to walk 18 flights down to the street. Nor did he have the money or the patience to try to get a taxi and get home.

Maybe he shacked up with a secretary. There were still secretaries back then.

The house began growing cold. We still had Fall and Winter in those days--before we succeeded in heating our planet into oblivion. My old lady threw some store-bought logs on the fireplace and we sat around it for warmth.

After a while she said we could cook our hotdogs on the open flames and we did, just like Robinson Crusoe would have done had there been an A&P near his hut.

Around seven, the fire began to die and my mother decided someone had to run to the far-end of the back yard and carry in some more logs.

For whatever reason this seemed terribly scary--a journey on the order of Shackleton or Admundsen. The night was darker than I had ever before seen it. Our noisy little neighborhood was quiet--except for the occasional howling of some pedigreed dog from someone's back yard.

The full moon that lit up the clear night seemed almost close enough to touch. Were there aliens poised to invade us?

My older brother was the obvious choice for log-gathering. He was nine and "the man of the house." But he was frightened. My mother made the excuse of having to watch over my five-year-old sister.

It fell to me to get the logs. I jogged to woodpile, half scared that I would be eaten by monsters, half scared that this was the start of the long-anticipated Soviet invasion and I would soon be prisoner of the Gulag, like so many Tannenbaums before me. But I persevered and made it. It probably took me all of 20 seconds.

I picked up a pile of four logs or maybe five, as many as I could carry. I worried about the spiders who were nesting in the logs. Maybe they would attack me. But I had a job to do, so I did it. Spiders be damned.

I ran back across the yard looking up at the enormous, ominous moon just once. Between the chill of the night and the terror of the moon, I made it back to my mother without, I think, breathing. I seldom breathed around my mother. It was safer not to.

We fed the fire. Maybe my old lady told a mild ghost story--probably something about her benighted childhood. Then we were each given an extra blanket against the cold and sent to bed. Maybe my sister slept with my mother that night.

My old man was home around lunch-time the next day. The lights were back on as well. He told stories of people trapped in subways and on elevators. It was going-home-time in New York when the east coast went dark. He joked about one dumb man who was trapped eleven hours on an escalator. I've never had to wonder where I got my "gift" of the one-liner.

Life returned as normal as possible after that. My mother probably bought 71 boxes of Sabbath candles in case the lights went out again and stored them in her dank basement where she could probably never find them. Blue-ribbon panels invariably ate expensive meals and drank expensive liquors discussing how this could have happened and how we can stop it from happening again.

John Lindsay, New York's new, fresh-faced and ineffectual mayor, calculated how he could reap more political power by capitalizing on the event. Nelson Rockefeller, the richest man in the world and New York's governor, looked around for someone to blame. My old man probably looked around for another secretary.

And life went on, flickering lights, intermittent darkness, fear of the unknown and all.