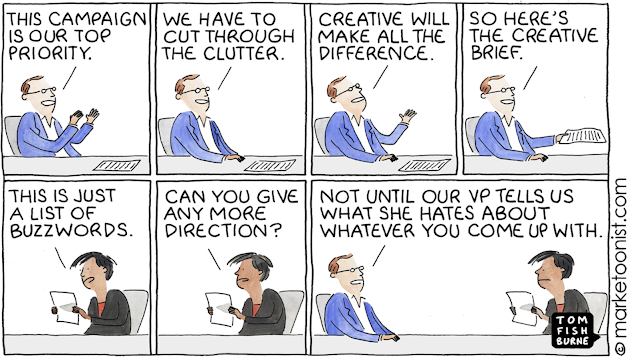 I had written a bunch of ads for a client.

The best ads, most times, don't come from a brief. They come from a sense of who the brand is and what they're selling. Sometimes, it's better to convey a feeling of who a brand is, rather than the specifics of the brand.

Most people, after all, don't give much thought to brands or to character or to mission. There are times when you're better off staying at that level--and leaving the details for someplace else.

Of those hundred or so ads, the client had bought seven. Not a bad ratio.

And GeorgeCo., LLC, a Delaware Company, was in the process of producing them. In about 98 different sizes each. That's life today. Fortunately, I had hired some really good people to make it all happen, and they were smart enough to leave me out of the intensive sausage grinding.

On Thursday, one of the ads was killed.

To my eyes, to the father of those ads, they turned on one of my children. Like the Romans would sometimes expose a child to the elements when they decided they didn't or couldn't raise him or her.

All at once, I had a new ad to write.

It's funny how the different demands of work go. I dropped whatever I was doing and switched to writing new headlines. But headlines have to be channeled, you can't do it as you're switching planes. You have to be in a rhythm to get them right.

I wrote about a dozen and thought they were good.

I sent them to my account person. She thought they were good.

She sent them to our client.

I got a short note back.

The best kind of note.

"I really like the last one," she wrote. "But I want to love something and I don't love it."

I suppose it's like having a 16 in Blackjack. You really want to get a card, but the odds tell you to stick.

I got the message.

"Let me write some more," I wrote back. "I think you're right. I want you to have something you love, too."

I suppose I could have bayed at the moon.

What the fuck is wrong with them?

How about a brief with what you want to say, instead of leaving it to me?

All excuses I've heard a lot during the last forty years.

Like I have no time. There's no brief. The product is boring. No one cares. I have to use stock. The space is too small.

It's not that I have thick skin, or that I roll over.

The client didn't love what I had done.

Rather than bemoan my chosen profession, I thought about how lucky I am.

I have a client who wants to love the work she's paying for.

If I hire a carpenter to build me bookshelves, I don't want acceptable ones. I want beautiful ones. Ones that exceed function. That tickle my brain.

I think that's more than fair.

Viktor Frankl wrote one of the 20th Century's most-important books. A book I've given to more people than any other: "Man's Search for Meaning."

We find meaning when we do things we love.

I worked a lot on writing some new ads and I'm sending them over in less than an hour.

I hope they do.