When the shark bites.

Like so many people--lucky people, I'll add--It's been 17 months since I was fired from Ogilvy for being old and about 20 months since I've taken a vacation.

Since I was ageism'd out of the industry, my life has turned upside-down. There's no joy in finding yourself unemployed at any time. But to be thrown out as useless because ostensibly you're old is enough to leave you feeling gutted.

Fortunately, my reputation in the industry was solid enough for me to quickly--after my severance ended--gain employment. I went to work freelance for Ogilvy's ex-CCO, Steve Simpson and then, rather quickly, clients began beating a path to my keyboard.

I had decided since I was canned that I really couldn't afford any longer to work at an agency. By the time they're done paying their Holding Company vig, their ever-expanding roster of c-suite executives, the line of black-cars that waits outside the office every night, there's really no money for the people who do the work. 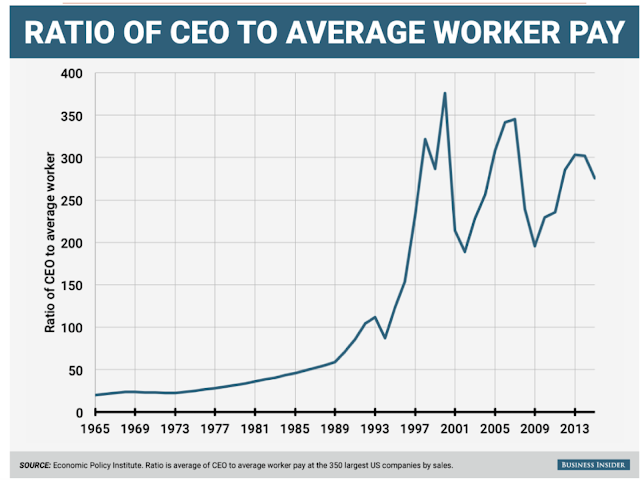 That doesn't include, of course, subsidizing the failing office in East Fonguick, $7000/night suites at Cannes, three or five former CEOs paid in perpetuity, and so it goes. The chart directly above shows this isn't just me being bitter.

But for all that, thank whatever or whomever you believe in.

Though the lesson for me is believing in yourself.

Because since Holding Company economics decided to rid a once august agency of the bulk of its talent, my new work-life has restored some long-time precepts that had been shattered by corporate power, monopolistic practices and runaway shareholder capitalism.

Primary among these is the most basic. Something that's been missing from our trickle-down belly-up economy for virtually my whole life.

You'd think that equation would be pretty simple--even fair, if I can use naive principles like fairness.

But the titans of the ad business have broken the correlation between work and pay. They've broken the loyalty equation--you're meant to be loyal to the company, to work nights and weekends (without extra-pay) and you'll get nothing back.

When I was fired at 4:15 in the afternoon, about six hours after the rest of my tranche, I was offered a paltry amount of severance which did not include my previous years of service.

"We're just going by the book, George," they said.

Of course, there's no answer to any of this. There's just this, from Mr. Welles, who knew about corruption, dishonesty and the venal.

This is Amerika, today. And there's nothing any of us little people can do about it.

But there is this: The other night, late, I got a note from a client. I deal with smaller clients now than I had--but I'm dealing with the C-level, not fourteen steps to get to the C-level.

"George, I have an hour on Friday. I'd love to see some work."

This was Tuesday, late, and I had just gotten my proposal approved four hours earlier. I hadn't started writing yet.

And the work will be good.

Because it's my work. And my choice. And my money. And my rewards.

And that's the way the business should be.

When you run things for clients, and workers, and the work.

Not for speculators, arbitragers, and Ponzi-schemers.

Posted by george tannenbaum at 4:59 AM