I believe in much of what Dr. King said. And I believe, most of all his statement that the "moral arc of the universe is long, but it bends toward justice."

One of the problems I think we have today as a society is, however, that we don't understand what the word long means.
Not only do we not, generally, read history. We don't read anthropology, either. We think everything that happens to us is rare and egregious. The worst. The biggest. The most-perilous. 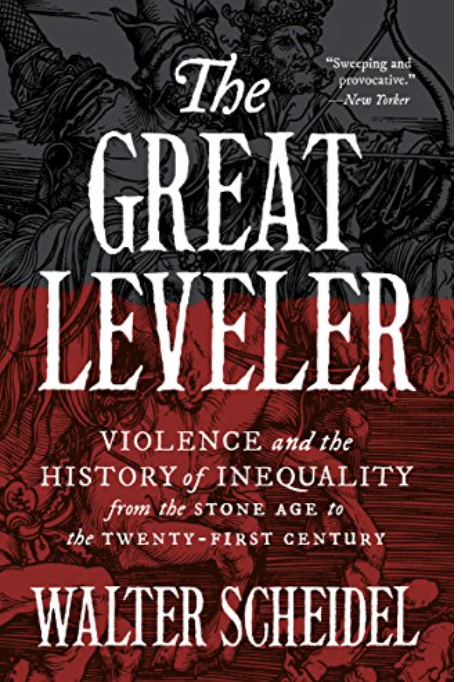 I have just finished reading a very complex book on economics and the economics of wealth and income inequality. You can check out the book here. But I warn you, it ain't exactly a beach read. You can read about a column by Scheidel here.  And a review by The Economist here.

None of it is exactly brimming with optimism.

Bernie Sanders, Elizabeth Warren and sloganeering aside, wealth and income inequality are not issues that can be solved with the stroke of a legislative pen.

Scheidel looks at them from a long--there's that word--historical perspective. A perspective of 12,000 years or so. From about the time humanity began making the transition from foraging to agriculture to settlement.

Mostly it's that income and wealth inequality have always been with humankind. And income concentration--with everyone making about the same--can be achieved only through incredibly violent forces. Four to be exact. Which Scheidel calls "The Four Horsemen of Leveling."

Not your garden-variety wars. Giant wars of mass-mobilization and mechanization. WW1 and WW2-level conflicts, involving roughly 60 percent to 80 percent of the world economy.

Again, sorry about this. Not AIDs or Covid-19. But smallpox in the Americas or Plague over much of the rest of the Northern hemisphere. These were pandemics that wiped out not a million here and a million there. But between 60 percent and 95 percent of populations.

Often brought on by the two conditions above. As often brought on by climate change. Think Aztec. Incans. Toltecs. Angkor Wat. And others. Where whole societies, for reasons we can't really determine, just stop function. This isn't potholes in the Bronx or poisoned water supply in Flint. They're nation- or region-wide collapse.

Not the sign-wielding Tea Party sort. But Mao's Cultural Revolution ilk. Where he and his doctrinaire thugs killed roughly 70 million people. Or Stalin in Russia, who killed over a longer period of time and with more efficiency than even Hitler.

Disease is a good example.

When the Black Death killed 50 percent of England--and returned roughly twice a generation--the was, naturally, a labor-shortage. Serfs (a sanitized word for slaves) refused to work for their former wages. Despite legislation passed by the Lords of the land mandating that they do so, they didn't. And wages, for a few decades, rose.

And after some time, wealth, again, accrued to wealth. And people again, masses of them, were working for the equivalent of one-pinenut a day's sustenance.

This will likely get me into a lot of trouble.

I wish the world were a better place.

But whether it's race, gender, religion, skin-tone or anything else, these biases have been built into life on earth since the beginning of life on earth.

My advertising point is about 19-fold.

One, I've always divided the ad world into the Faulknerites and the Digitites. The digitites believe technology changes everything, including human behavior. Remember how we all began interacting with ads and leaning in?

The Faulknerites, believe as Faulkner did that "The past is not dead. It is not even past."

That means, simply, changing behavior or buying habits is not a parlor trick. It doesn't happen by running a message once. It happens through inundation.

The story I heard from the old Ted Bates agency went like this. Bates was giving a client a tour. There were hundreds and hundreds of offices. The clients said, "We haven't changed our campaign in ten years. What do all these people do?"

Bates replied, "They keep you from changing it."

Repetition is how persuasion works.

George, will you take out the garbage.

George, will you please take out the garbage.

George, for the hundredth time will you take out the garbage.

My guess is if you thought about all the taglines you can recall, 80 percent of those you remember would be from the three-network inundation era of advertising. Many of which haven't been used in advertising since Ronald Reagan was playing at president.

I'm not sure I could tell you one contemporary tagline that was writ in the last five years. It's not even that most suck. It's that they're not given time, money or weight.

Minds and behaviors and actions change slowly, if at all. If you want to have any chance it takes time and money and an actual idea that cuts through and has resonance.

I hope the world becomes a better place.

But a yellow ribbon, or a 'be kind; button, or a graffiti'd wall ain't going to do it.

Remember, as Dr. King said, the moral arc is long.

The customer journey may be even longer.