I woke up yesterday morning, amid the usual Covid gloom and saw this headline in "The Wall Street Journal." 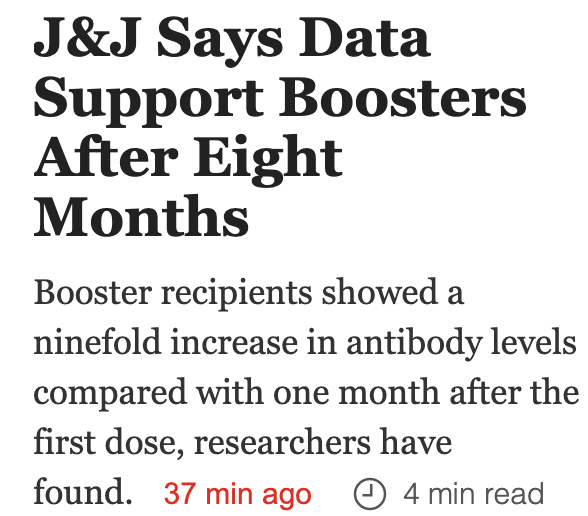 Something seemed off to me. So, I clicked over to "The New York Times," where I found this: 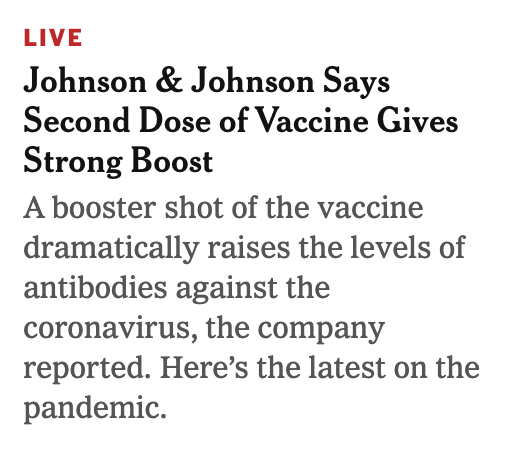 I turned to my wife, who's smarter than I am about science and data. Smarter, but also less cynical when it comes to Big Pharma.

"Isn't this," I asked, leading the witness, "the same as 'Root Beer Bottlers' Study Says A&W and Dad's Cures 17 Types of Cancer."

After all, it's a study by J&J--a company who, not long ago, was party to a party $26 billion settlement owing to false claims and over-selling of dangerous opioids. It's a study by X promoting X.

In fact, I don't know enough about J&J's booster studies. But I do know, they haven't yet been verified by objective third parties like the Food and Drug Administration. Until they are, headlines like the ones above aren't news, they're advertising.

And not good advertising.

Because they're empty claims at a time when we need more than claims.

As the Roman poet said two millennia ago, Quis custodiet ipsos custodes? Who will guard the guards?

As for advertising itself, our industry, in its present blighted form, is further blighted by loud trumpets and drum-banging in the ugly form of the case-study video. Many creatives put such crap in their books. They're expensive, non-fact-checked films about the amazing success of this or that bit of agency work that propelled a brand or a product forward.

"We got 62 billion impressions."

"We were third in a competitive field and within months blew by the leaders."

"We changed culture because ActionNew 47 in Muncie, Indiana had a piece on our brand on just before the weather."

We've all heard, we've all seen, we've all probably written and cut these spurious lies.

Though we're purportedly in the truth business.

Just yesterday I got a phone call from a client. I had flown out to work with this client in July--my first business trip since Covid and first since I've been flying solo.

I didn't know what I was getting into, but moments after I entered a giant conference room, I found myself in front of 75 people from all over the country. Seconds later, with everyone watching I was asked to write a manifesto--live--for a complicated offering that would be presented to the company's board in just hours.

I felt like I was back at Ogilvy writing an eight-page insert without a brief, "you know what to write, George," at two in the morning.

This client called me yesterday to ask me if I had any time to do some more work with them.

"You really nailed that manifesto," he said.

"Thank you," I said. "I may ask you for a quotation for GeorgeCo., LLC, a Delaware Company's website."

I have a lot of these sorts of conversations with clients--either on the phone or via email.

Some years ago, I had done some work that a client was very pleased with.

His boss answered. Snidely. "From two units to four."

I like when clients tell me how happy they are or they've been with GeorgeCo., LLC, a Delaware Company.

For now on when they send me a note of thanks, I'll probably ask them to have them notarized, or at least signed by a witness or two. Hopefully someone with no recent arrests or peccadillos.

Then, I'll put these notes on my site. Why shouldn't I?

Though, I really can't wait till I can rip off Dave Dye's ad below.

That's what I'm aiming for. 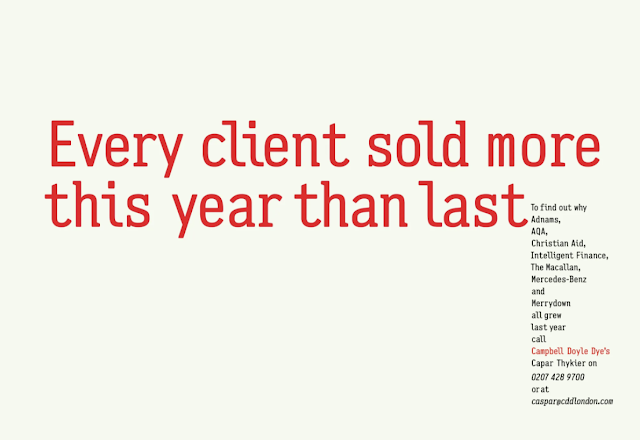