Last week, like most weeks, was not a quiet week on the Gingham Coast.

I remember as a kid watching Saturday morning Bugs Bunny cartoons. Occasionally, there'd be an episode where over a full-screen map of the United States, a dotted line would animate to illustrate Bugs' peregrinations. These peregrinations, as above, usually involved Albuquerque and often, Pismo Beach.

My dotted line this week was a butterfly in a carwash.

I started the week traveling to New York on the Amtrak. I'd imagine train travel in the United States in 2022 is about twenty-percent slower than it was in 1922. It reminds me of something I read once that the Incan roads from the 15th Century were in better repair than Peruvian roads in the 20th Century.

Nevertheless, I was lucky enough to have a nice drink with a nice potential client. And have another nice drink with a new old friend. It's a lot to travel for seven hours on the hope of potential business. But you do. As Old New York's Con Edison company used to say, "Dig We Must."

You learn along the way that life often doesn't have the "causality" you wish it had. There are very few games you play where you put in one and immediately get back one-and-a-half. Most scams and ad agencies and new technologies make that sort of promise. But in reality, most leads are long-leads.

Returning to Connecticut, next my dotted line dodged homicidal traffic and Scylla-like potholes as my wife and I drove up to Boston. Our older daughter and her husband had their first child, a boy, on Wednesday and up we went to visit Jude. After the requisite hugging, we once again fired up my 1966 Simca 1600 and drove back to Connecticut. After another long day of work and about twenty more Zoom calls, we drove off to New Jersey, to a town called Franklin Lakes, which was named after an illegitimate son of Benjamin Franklin, William, and the 1940s Silver Screen siren, Veronica Lake, she of the peekaboo hairstyle.

There, in the wilds of the Garden State, on the former site of a Sizzler that was torn down so they could build a Rustler's, or the other way around, at a gorgeous but badly named country club decorated with faux-"first peoples'" iconography, my old friend's older son got married, while 200 well-dressed people over-ate, over-drank and over-damaged their ears on the over-amplified over-produced music.

In all, the events were both somber--my best friend, the father of the groom, died late last year at 64, but joyous. A marriage of two beautiful, hopeful, hardworking and positive young people is always cause for celebration.

So, of course, was the birth of my first grandkid.

It's a strange thing getting old. 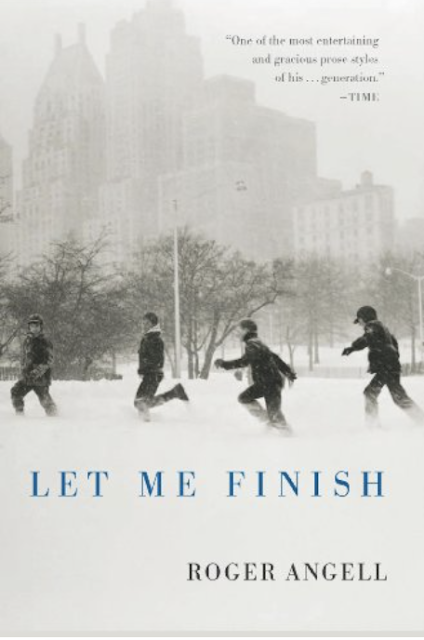 You see that your time on stage is coming to a close. "Let me finish," the great Roger Angell once implored.

I have, still, my burning ambitions, my need to make money, to succeed, to provide, to work with clients and to do work I believe in. But more than ever, I realize that it's the kids who are taking charge, the kids who are sitting at the main tables while I'm parked with the similarly white-haired at a table off to one side while the spotlight is on others.

That's as it should be. That's ok.

This same flower that smiles today/
Tomorrow will be dying.

William Shakespeare wrote of the Seven Ages in "As You Like It." As usual, he got it righter than almost any writer ever writ. Even Robert Herrick, cited above.

"All the world's a stage,     And all the men and women merely players:     They have their exits and their entrances;     And one man in his time plays many parts,     His acts being seven ages. At first the infant,     Mewling and puking in the nurse's arms.     And then the whining school-boy, with his satchel     And shining morning face, creeping like snail     Unwillingly to school. And then the lover,     Sighing like furnace, with a woeful ballad     Made to his mistress' eyebrow. Then a soldier,     Full of strange oaths and bearded like the pard,     Jealous in honour, sudden and quick in quarrel,     Seeking the bubble reputation     Even in the cannon's mouth. And then the justice,     In fair round belly with good capon lined,     With eyes severe and beard of formal cut,     Full of wise saws and modern instances;     And so he plays his part. The sixth age shifts     Into the lean and slipper'd pantaloon,     With spectacles on nose and pouch on side,     His youthful hose, well saved, a world too wide     For his shrunk shank; and his big manly voice,     Turning again toward childish treble, pipes     And whistles in his sound. Last scene of all,     That ends this strange eventful history,     Is second childishness and mere oblivion,     Sans teeth, sans eyes, sans taste, sans everything.

I'm not quite in the last scene. Though at times I am so tired, so weary and, yes, so worn and disconsolate, I wish I were. Maybe I'm nimble enough to be in stage five, with "fair round belly," and "wise saws and modern instances."

I had a thousand Zooms. I spoke to a thousand clients. Maybe I wrote a thousand ads. And I drove a thousand miles. I am not yet "sans teeth, sans eyes, sans taste, sans everything" but at times I can sense the sand in my personal hourglass dropping away.

The sans and sands of time.

Posted by george tannenbaum at 6:59 AM