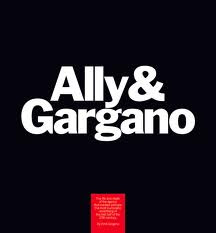 My "FFB," (friend from blogging) Dave Trott wrote yesterday about the new $200 opus called "Ally & Gargano."http://www.cstadvertising.com/blog/2010/09/energy-v-style/ In his post, Mr. Trott compared Gargano's book to one by George Lois.

The Ally & Gargano book, all 11 lbs. of it is, according to Dave "Like a gravestone.
This is a book that takes itself very seriously. A book that belongs in a library, or a museum. And it’s written the same way. Lois’s book is written fast and fun."

I don't disagree with Dave. In fact, there's a small ad for the book in today's "New York Times," which calls the book "the most important book on advertising in a generation."

Important and advertising are two words that don't usually go together. But for today, I'm not going to defend the book, or argue with Trott. He makes some salient points.

As an Ally alum, I was able to buy the Ally & Gargano book for half price. Maybe that softens my feelings.

Also, it includes the copy and photoboard from what I consider one of the greatest commercials ever: Hertz "Balloon." Written by Ed McCabe and art-directed by Ralph Ammirati. That commercial alone was worth the price of admission.

"They can't talk about convenience because they have only half as many places to pick up or leave a car.

"They can't talk about price because they charge just as much as number one.

So they make a big thing about trying hard. About all the other services a customer should expect. Automatically.

Hertz regrets that we had to do this in public.

(The air remaining escapes in a loud flatulent rush.)

(A finger rises slowly from the bottom of the screen.)

"Rent a new Ford from Hertz. We're number one."
Posted by george tannenbaum at 7:19 AM

Here's what would happen if you showed that script to a creative director today.

CD: What's with all these words. Show me, don't tell me. Don't talk about the competition. Just show some great shots of a Hertz car on the PCH with the ocean behind it. Now get the fuck out of my office you talentless hack. (Or, you short talentless hack).

11 pounds.what a waste of paper. Meaningful to some but not all that many. Eleven pounds. Jesus.

@anom 1. Well put. We rarely, if ever, see such smart advertising today. To counter attack a brilliant campaign as the Avis one is very, very hard, and could easily backfire. Or get cheesy. Ed McCabe at A&G wrote a very compelling reply. Which I'm sure spoke to their loyal customers in a very clear and engaging language, and maybe even undermined Avis's argument. Brilliant. Now, of course, media wasn't as fragmented back then so it was easier to reach the same audience. But still. A great battle between ad giants it was indeed.
@ anom2. I haven't read the "bible: yet. But I'm inclined to think that it's not irrelevant at all. Advertising has indeed moved on, but what is interesting is that now we talk about the conversation. Back then there was no other way to converse about ads than talk about it mouth to mouth. Or engage on
TV as Hertz did. Now we have all the tools. And while all of us seem to a agree it's all
about the conversation customer engage in with the brand and for the brand I'd love to see a conversation as brave and bold as that in modern media. Between brands. We still believe in brand preference don't we? Thing is that today's advertising is so bloody dull. No drama!

Nice dispatch and this fill someone in on helped me alot in my college assignement. Thank you for your information.

The company provides 24/7 access to the invoice records and reports through an efficient online system. What makes a rechargeable toothbrush different from a regular toothbrush, though? These cordless toothbrushes have a higher quality in cleaning teeth, largely because of the tiny bristles that move in different directions at a powerful speed. Some of the more popular brands are Sony Eneloop and other brands like Duracell that are rechargeable NIMH batteries.