Happy Subway to you. 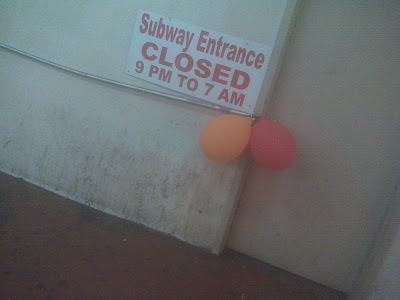 In the richest country in the world, in the greatest city in the world our infrastructure has crumbled. I am reading now Adrian Goldsworthy's epic "How Rome Fell," and it's hard not to see the parallels.

Ah, but New York runs with startling efficiency. Amid the noise, the filth, the over-crowded sweat and urine, "I saw the best minds of my generation destroyed by madness, starving hysterical naked,

dragging themselves through the negro streets at dawn looking for an angry fix,

angelheaded hipsters burning for the ancient heavenly connection to the starry dynamo in the machinery of night,

who poverty and tatters and hollow-eyed and high sat up smoking in the supernatural darkness of cold-water flats floating across the tops of cities contemplating jazz,

who bared their brains to Heaven under the El and saw Mohammedan angels staggering on tenement roofs illuminated,

who passed through universities with radiant eyes hallucinating Arkansas and Blake-light tragedy among the scholars of war,

who were expelled from the academies for crazy & publishing obscene odes on the windows of the skull,..."
Posted by george tannenbaum at 8:24 AM

ginsberg on friday am. hadn't read howl in awhile. kudos