Maybe my fire has gone out.

I curse Jamie Dimond every time my wife removes money from our Chase account but I'm not throwing Molotovs through the plate glass.

To be fair, despite billing 60 hours a week, I'm hardly even occupying Madison Avenue.

I'm also not railing against any of the following:
The military-industrial complex.
The "surveillance-camera" state.
The corruption of our government.
The despoiling of our natural environment.
The destruction of the ozone layer.
The rise of sea levels.
The rise of college tuitions.
The death of the individual.
My cable company.
My wireless company.
America's wealth inequality.
Urban sprawl.
Suburban sprawl.
Rural sprawl.

I also don't color my Facebook page pink. Or pass along posts about helping burn victims.

No. Like I said, my fire has been quelled.

That said, I saw this sign recently in the Maritime Museum in Wellington, NZ. It's from the Wharf Wars of a century ago.

Finally a cause I can get behind. 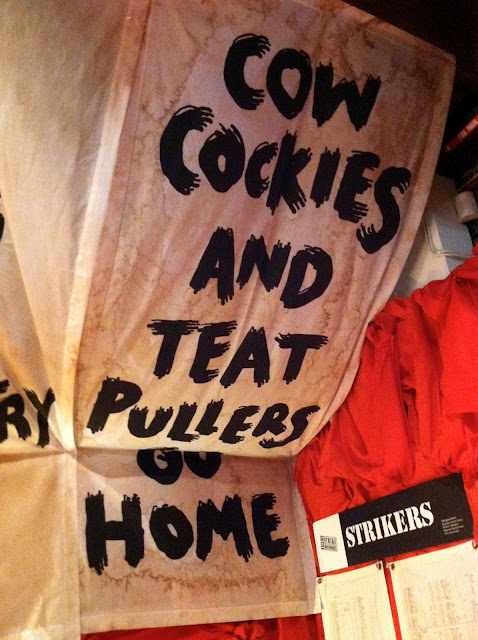 Posted by george tannenbaum at 11:27 AM

You can be a brilliant guy at times, intellectual, well read, experienced and than veer off in curmudgeon cynicism that loathes all. Its not fire its balance.

It was a joke, Anonymous.