After the frenzy of my last few days at work, the sturm und drang of preparing for a pitch, sleep did not come gently to me. She did not tiptoe in like the fog on little cat feet. She did not drop by at all. In fact, my only nocturnal visitor was my old nemesis, Dame Insomnia. She forced me out of bed and into a gloomy wakefulness.

I shuffled from my bedroom into the living room, hopping on one foot as I slid on my blue jeans and tied my shoes. Whiskey was obedient and waiting. She bowed her head with the grace of a Royal and calmly accepted her collar and leash. We were out the door in minutes and heading uptown to a bar we frequent called the Tempus Fugit.

I hadn't been to the Tempus Fugit but once in the month since I had returned from New Zealand. Work was crying too loudly and my sleep, for whatever reason, was coming too soundly. But tonight the Tempus Fugit was both inexorable and ineffable. It was the place that had to be visited.

We arrived as we always do in a shroud of silence. There are groups of people in front of other bars, smoking cigarettes and laughing too loudly at things that are not funny. But there is none of that near the Tempus.

There is just the silent mute and muted brick of an old warehouse and no sign anywhere announcing its presence. Whiskey and I made our way down the labyrinth of stairways and hallways and industrial metal doors, until we saw the dull incandescence of a single 100-watt. We eyed the joint front to back, left to right, up and down but, as usual, no one was there save the bartender who runs and owns the place.

Before I was even planted in my favorite stool, one in from the end, he had placed a wooden water bowl next to where Whiskey lazes and a Pike's Ale (the ALE that won for YALE!) in front of me. He then slid over a small bowl of Spanish peanuts, which I pushed away as I always do with my usual legumey epithet--"a pound in every nut," I said. He laughed and placed the bowl under the bar.

"'Tain't a fit night out for man nor beast," he began, with more than a slight dosage of W.C. Fields in his delivery. He was quoting from one of Fields' best movies, "The Fatal Glass of Beer," and I laughed along with him.

"Have ya got your dulcimer here?" I asked him, feeding him a line from the film. "I don't even mind if you play with your mitts on," I continued.

"You are a fan of the great man," the bartender asked.

"From Bissonette to Snavely," I replied.

"And Sou-say, I assume. "(In "The Bank Dick," Fields played Egbert Souse. Which everyone pronounced sowse.)

The bartender drew me another Pike's.

"I've missed you around here," he said. "I haven't seen you in quite some time."

I drank a long gulp of Pike's. I've been around the world, and there is no beer like it. Especially the way the serve it at the Tempus Fugit, in  eight-ounce juice glasses so it does not run flat or warm.

He took my glass as I drained it and pulled me another amber.

"I have been snowed under at work," I began. "The shit hit the fan when I was away and the client placed my account under review. I got back and immediately had to jump in to help 'save it.'"

He wiped the high-gloss of the teak bar-top in a vigorous circular motion. The wood was as shiny as it was going to get, but he kept at it, staring into the grain. He stopped wiping then stood up straight.

"Like you, Fields was at war with the world." 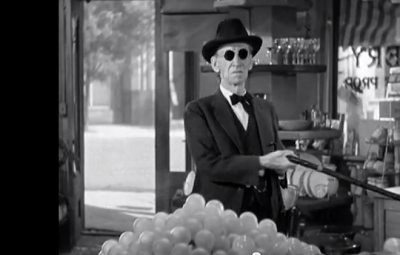 "You are stacking lightbulbs in front of a blind man with a cane. No matter what you do, those bulbs will be obliterated."

"What's the alternative?" I asked. "I can't just sit there and let it happen."

He laughed and said nothing. He said nothing for a long-time. So long that I feared I had pissed him off.

"Let the lightbulbs break," he whispered. "It's not your job to hermetically seal the world. You can't fix everything. Shit is going to happen."

I polished off the remainder of my Pike's and readied myself and Whiskey to leave.

"Let the lightbulbs break," I repeated.

I shoved two twenties over the bar--I had had after all three beers. He ritually pushed the money back my way, "On me," he said.

We walked home in the rain.

Posted by george tannenbaum at 10:42 AM