On the street where I live.

Just a block from my apartment is a side street that is unlike the other side streets in my neighborhood.

Side streets for those not from the city, are where in the words of Paul Simon, "the ragged people live." They are lined with small, tilted tenements with old appliances and 50 years of paint on windowsills and decades of grime in every corner. The apartments were always small and crowded in these old tenements but now as the Irish and German and Polish and Hungarian families have moved out or died off, singles have moved in and the apartments have accordingly been divided into ever-smaller units.

These tenements all follow roughly the same plan. A short stairway up from the street into a cramped tiled portico. Often there is a set aluminum or gleaming brass mailboxes recessed into the wall, usually littered with stickers from the local lock-smith and menues from the local Chinese.

These apartments, now that they're occupied primarily by young people, are transitory places. They are first apartments and serve as housing until raises are earned, couples couple or their residents give up the Manhattan ghost and jump ship to Brooklyn, where the spaces are larger and the rents are lower.

Apartments like these line the streets of my neighborhood. In the weather that's to come--the warmth of Spring and Summer, the windows will jimmy open and music will pour out and mash up in a glorious flood of noise. The few children left in these tenements, there are two kids I know just four houses down from me who are the product of a Puerto Rican father and a sturdy Hungarian woman, will wrench open the hydrants and will slip and slide on old corrugation, right there on the dirty asphalt.

But one block north from where I am sits this row of building--built as brownstones for the upper-middle, not as tenements for the unwashed. 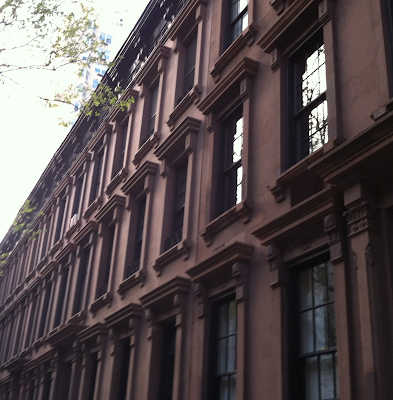 Their proportions are better, their doorways are designed by architects and have recessed lighting. They house not 16 single people but usually a family of four, sometimes with "help" living in the ground level, below the slant of the stairway up.

When these apartments become vacant signs go up that read "for sale." They have nice serif faces. They say money and these brownstones cost millions. One block south, there are for rent signs crooked in windows and some times hand-written. Here you can still get a one-bedroom for less than two-thousand dollars. A rarity in white Manhattan.

This is a bit of where I live. A small slice of my world.


Posted by george tannenbaum at 9:25 AM