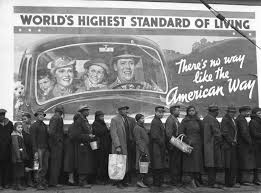 I think the central problem with much of American life--at least life depicted on TV or in political campaigns is one of cognitive dissonance. That is, we show a reality dramatically different from what's really real.

During the Olympics I saw a horrible commercial for United Airlines about 100 times. Even if it were good, I'd be exhausted by it after 100 views. But this spot was so mind-numbingly overblown and dumb--so divorced from the reality of air travel that it made me hate the brand even more than I did before the spot ran.

Every action, every fake smile, every element and scenario depicted in this blight is an affront to anyone with taste and a sense of what air travel is really like. If you put it on a continuous loop--which they essentially did--it could serve as some sort of Clockwork Orange torture inflicted on serial miscreants. The advertising equivalent of waterboarding.

The un-ending BMW spots were almost as pervasive and pernicious. Worst about them was they have such a great product in such a competitive market and they were able to say nothing. Worse they said nothing with such overblown pomposity that they made me think Little Lord Fauntleroy should be their brand's spokesperson.

For those of us old enough to remember the great BMW advertising done by Ammirati & Puris, it was like Hamlet acted by the cast of Duck Dynasty.

There were too many more to mention here. The overblown spot for someone--a sporting goods store, a brand of sugar water, that told us how trace amounts of gold are in our hearts. Some McDonald's spot that showed us how love blooms via chicken McNuggets.

You know the tripe.

You can only ask.

Is this the best we can do?

Posted by george tannenbaum at 8:44 AM