On the evening of January 4th, until 1:50 AM on the morning of January 5th, "Forty-one policemen, detectives and railroad agents searched 2,600 lockers in Pennsylvania Station." An anonymous caller claimed to have hidden a bomb there. 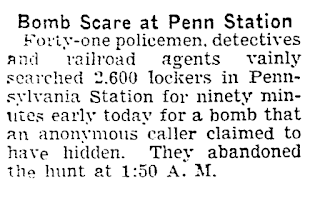 New Yorkers next heard from the bomber on Washington's birthday, February 22, 1956, when, the Times reported "A 74-year-old attendant was seriously injured yesterday when a homemade bomb exploded in the men's lavatory at Pennsylvania Station."

The report continued, "Fragments of the explosive led the police to conclude [the bomb] was the work of an eccentric who is believed to have planted twenty-five such bombs around Manhattan since 1940. Eight persons have been injured."

Lloyd Hill, the men's room attendant, was informed by a young man that there was an obstruction in one of the plumbing fixtures. Hill tried to clear the blockage with a plunger when the device exploded.

Police found "lying in the washroom..." "and old sock, the frame of a watch and metal fragments." Chief of Detectives James B. Leggett said the fragments found were similar to those found at the scene of previous crude bombings in local theatres and railroad terminals.

Hill, of 141 W. 110th Street, was taken to St. Vincent's Hospital with injuries to his forehead and left leg.

On April 5, 1956, the trail of the bomber seemed to be growing warmer. The police department, the Times reported, had assembled "the most comprehensive portrait yet of the eccentric bomb planter who has eluded them for more than fifteen years."

In a thirteen-state alarm, they depicted him as a "skilled mechanic who owns or who has access to a drill press."
60 percent of his bomb threats were mailed from White Plains.

The twenty-six home-made bombs "were the work of a man over 40 years of age who bore a 'deep-seated hatred of the Consolidated Edison Company.'" According to Inspector James J. Walsh of the Manhattan West Detective Bureau, the bomber "had chosen a wayward course to publicize his feelings about the company."

The Times concluded, tersely, "Eight persons have been hurt by the bombs."

The bomber was quiet for months, until he struck on December 2, this time, at the Brooklyn Paramount, home of a Wurlitzer organ with 2,000 pipes and 257 stops. 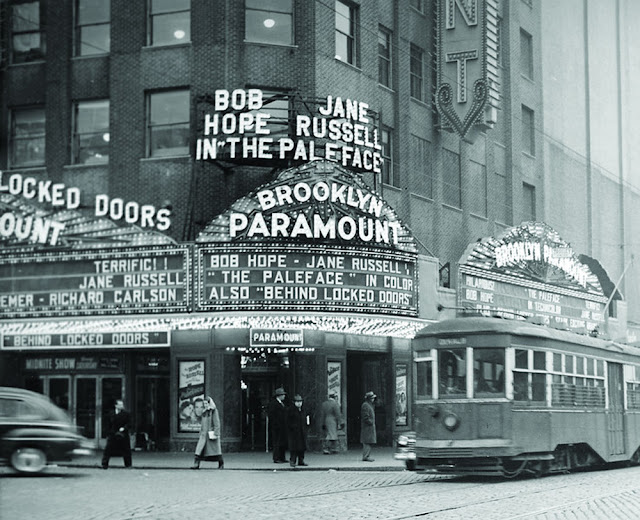 At 7:50 PM, with 1,500 people in the theatre watching Tolstoy's "War and Peace," a bomb went off, injuring six people. They continued with the film.

"Abrahan Blumenthal, a 36-year-old postal clerk of 627 Sackman Street...was lifted from his seat by the blast." Also injured was Doris Russo, 31, of 903 Hancock Street and her sister, Joyce Young, 27, of the same address.

They were treated at Cumberland Hospital.

On the day after Christmas, all hell seemed to have broken loose in New York. The Times headlined, "13 BOMB THREATS KEEP POLICE BUSY".

The subsequent article said, "Fall bomb reports pestered the police throughout yesterday as they unsuccessfully sought the man who left a homemade explosive Monday in the New York Public Library.

"As on Tuesday night, persons with warped senses of humor had telelphoned to thirteen places by late evening with bomb threats.

"The macabre callers during the day cited as targets two hospitals, two theatres, two libraries, one in Newark; a hotel, a large apartment project, a pier, a restaurant, and business houses, one in Hillside, NJ."

Police Commissioner Stephen P. Kennedy was "considering the offer of a cash reward for information leading to the arrest and conviction of the person responsible for the placing of thirty-two pipe-type bombs in public places here since 1940....Police said yesterday they were not ruling out the possibility that the perpetrator might be a woman."

1956 ended with a long article in the Times by Alexander Feinberg. Stating that "Bomb scares and hoaxes [had] reached epidemic proportions..." the Police Department said they won't respond to alarms "unless a device was actually discovered."

The police brought in George Cermac, 63 years-old of Bethlehem, PA. He was interrogated at the East Thirty-fifth Street station, where he "suddenly collapsed and died."

Posted by george tannenbaum at 9:03 AM