BOMBS WILL CONTINUE UNTIL THE CONSOLIDATED EDISON COMPANY IS BROUGHT TO JUSTICE FOR THEIR DASTARDLY ACTS AGAINST ME. I HAVE EXHAUSTED ALL OTHER MEANS. I INTEND WITH BOMBS TO CAUSE OTHERS TO CRY OUT FOR JUSTICE FOR ME.
The above note directed police to the Paramount Theater in Times Square and to a telephone booth in the Pennsylvania Station. A bomb was found at the theater; nothing was found at the train station. 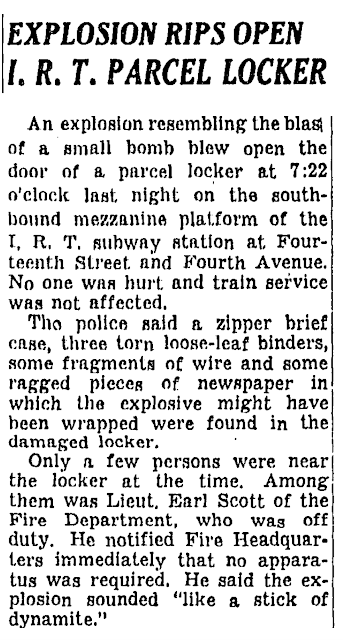 Some weeks after the subway locker explosion, the liberal Republican "New York Herald Tribune" received this note. Like the note above it was written in pencil in block letters. Experts of the NYPD noticed that the Gs and Ys were peculiarly-shaped, leading them to surmise that the bomber might have been educated in Europe.

HAVE YOU NOTICED THE BOMBS IN YOUR CITY – IF YOU ARE WORRIED, I AM SORRY – AND ALSO IF ANYONE IS INJURED. BUT IT CANNOT BE HELPED – FOR JUSTICE WILL BE SERVED. I AM NOT WELL, AND FOR THIS I WILL MAKE THE CON EDISON SORRY – YES, THEY WILL REGRET THEIR DASTARDLY DEEDS – I WILL BRING THEM BEFORE THE BAR OF JUSTICE – PUBLIC OPINION WILL CONDEMN THEM – FOR BEWARE, I WILL PLACE MORE UNITS UNDER THEATER SEATS IN THE NEAR FUTURE. F.P.

On March 19, 1952, a bomb exploded in Port Authority Bus Terminal without injury. In June and then December bombs exploded in seats of the Loews Lexington Avenue theater. The December bomb caused one injury.

In 1953, bombs exploded at the following sites:
NY Police described the Grand Central bomb as the "homemade product of a publicity-seeking jerk."

On November 7th, a capacity audience of 6,200 were at Radio City Music Hall viewing Bing Crosby in "White Christmas."  A bomb stuffed into the bottom cushion of a seat in the 15th row exploded, injuring four movie-goers.

This time the bomber got more press. In a front page story, the Times reported the explosion.

Victor Borella, vice president of Rockefeller Center and a member of the board of directors of the Radio City Music Hall was, according to the Times, "convinced the bombing was the work of a "crackpot." 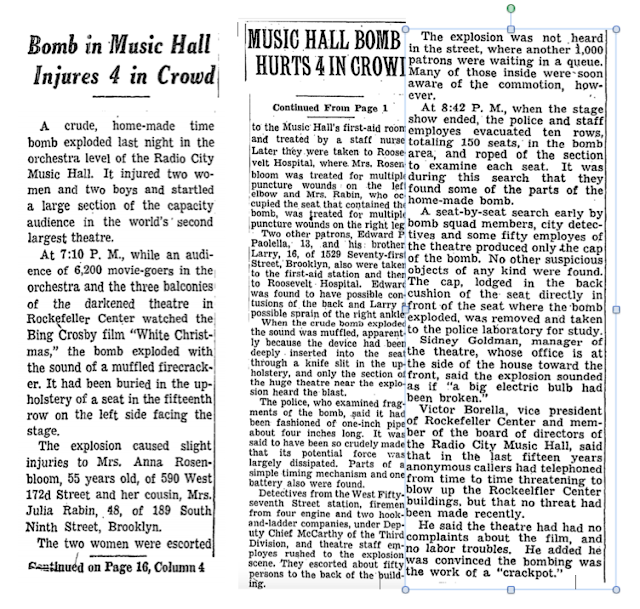 Posted by george tannenbaum at 10:58 AM