Ugly is only skin deep. 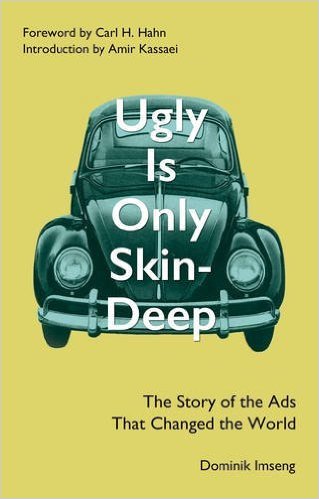 Do you agree or disagree?

If you desire to become well-versed in English literature, you'll find a way to read some John Milton, some John Donne, a lot of Geoffrey Chaucer (my personal favorite--if you can't make your way through Middle English, read Peter Ackroyd's modern rendition) and of course, all the Shakespeare you can get your hands on.

Just like, if you're a film aficionado, you ought to have a grip on Charlie Chaplin, Orson Welles, David Lean and Coppola's "Godfather" trinity.

I suppose that's some version of my second favorite, or third favorite line from Faulkner: "The past isn't dead. It's not even past."

Dominik Imseng reached out to me the other day, and we've begun emailing back and forth. He's written a new book,


"Ugly Is Only Skin-Deep: The Story of the Ads That Changed the World."

You can buy the book (and should) here.

Simply put--in addition to including dozens and dozens of great VW ads, Dominik lays out the story of how the ads were created, how the Shakespeare of modern marketing was created.

Years ago, back before many of my dear readers were even born, I worked for Ron Rosenfeld and Len Sirowitz. Two denizens of the heyday of DDB, responsible for many of VW's greatest ads.

Both Ron and Len were young inductees into advertising's various Halls of Fame, and I joined their 150-person shop with the hope that I would learn from them like Alexander the Great at the knee of Aristotle.

To be honest with you, when I worked for Ron and Len, it quickly became apparent to me that they no longer gave a shit. They had won every award worth winning about 30 times over and now were interested more in amassing mammon and polishing their country estates.

Nevertheless, I would chat with them about their old days, and I tried to learn all I could about what they had done. I'd run down to the Strand, America's greatest book store and buy every award annual I could lay my 29-year-old hands on and read every VW ad and every ad Ron and Len worked on.

Why don't we do this anymore?

Why don't we learn from our history? From the ads that created advertising?

Do yourself and your career a favor. Forgo two days' worth of pretentious caffeine. Spend your money instead on Mr Imseng's surpassing book.

And get in early for a month and spend half an hour a morning looking at advertising's equivalent of Breugel or Van Gogh or Durer or Caravaggio.

Read some ads. And learn.


Posted by george tannenbaum at 8:53 AM