Whitman in the Tempus Fugit. 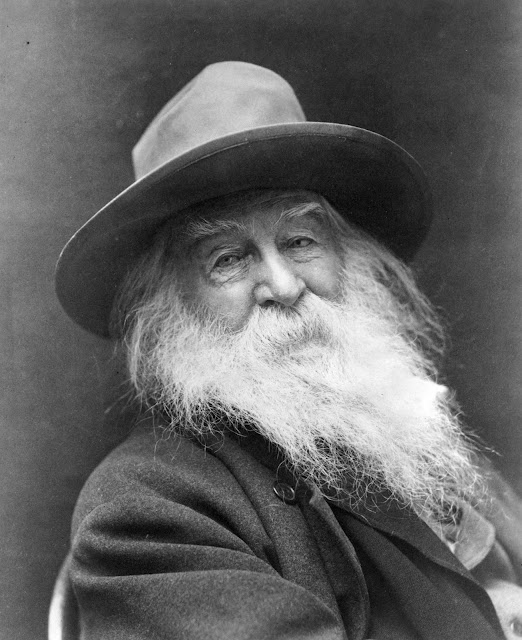 As I do so often when I am tormented by Dame Insomnia, I choose to surrender, rather than fight. It is for that reason that last night, I traveled North--North about a mile or so--to the dim incandescence and friendly confines of the Tempus Fugit.


Readers of this space know that the Tempus Fugit opened in 1924 as a speakeasy and hasn't closed for a minute since. You can get there (only if you know precisely where it is) by finding and winding your way to an old Verizon warehouse on east 91st Street, just off the river, then making your way up and down a series of hallways and stairways, through various galvanized steel doors, then down a precipitous ramp, and voila, there you are, easy as pie.


I arrived at about 3 this morning and the bartender--we agreed years ago to not exchange names in order to keep our relationship on a wholly professional basis--was already pulling me a Pike's (the ALE that won for YALE!) as Whiskey curled into her place and I rested my ever-expanding carcass on the worn burgundy leather of my favorite stool, one in from the end.

He slid a small juice glass of suds in front of me and then walked over a small bowl of salted Spanish peanuts which I pushed away with my right hand, while downing the Pike's with my left.

I saw at the end of the bar--about ten stool's distance away from me the haze of a thick corona of corona smoke shrouding a wide-brimmed hat above and a forest-like effluence of beard below.

I nodded in that direction to the bartender and said, blithely, and with more California than my soul possesses, "Who's the dude?"

The bartender brought me a second Pike's and slid over the salted Spanish peanuts again.

I took a small handful and went at them like a snake to a rat.

"It's Walt Whitman," the bartender said.

The bartender laughed at my vocabulary and polished with his damp white terry the dark mahogany of the bar top.


Whitman slowly stood himself up and seated himself on the stool to my left. He handed me a cigar, and brandished a long lit wooden match like Lady Liberty her torch. I smoked the cigar, suppressing phlegmy coughs along the way.

"Can I buy you a drink," was all I could stammer.

He continued without acknowledging my patter.


"There was never any more inception than there is now,

I watched the bartender make the old man a drink consisting of equal parts gin, bourbon, lime juice and a dash of bitters: the Suffering Bastard.

Whitman downed it like a stevedore. He took a long drag on his cigar and exhaled smoke like an old Moran tug carrying sludge three-miles out to sea.

It had been a long time since anyone called me boy. But Whitman, by my calculation was nearing 200, so I let the anachronism slide.

"You are Crossing on the Brooklyn Ferry?"

"We are all Crossing on the Brooklyn Ferry," he smoked. "We are all always Crossing."

He drained his Suffering Bastard and I my third Pike's. Whiskey stirred and stood by me. She had had enough of grumbling and cigar smoke and the sawdust on the floor.

"We receive you with free sense at last, and are insatiate henceforward;
Not you any more shall be able to foil us, or withhold yourselves from us;
We use you, and do not cast you aside--we plant you permanently within us;
We fathom you not--we love you--there is perfection in you also;
You furnish your parts toward eternity;
Great or small, you furnish your parts toward the soul."

With that, the Old Man let out a disaster's-worth of cigar haze, shrouding himself in vapor and, when it was gone, he was, too.

I reached into my pocket and removed two twenties to pay for my Pike's.

The bartender pre-empted me, "Stop this day and night with me and you shall possess the origin of all poems."

He pushed my money back to me.

And Whiskey and I walked silently and poetically home.


Posted by george tannenbaum at 9:26 AM