The bombings continued in 1955 in some new locations and some previously attacked sites.
The year in bombing began when on Wednesday, January 12 the Times reported, “Penn Station Bomb Blast Is Ignored by Commuters”. The bomb, which exploded at 5:25 PM caused “little hubbub among commuters.” Later that evening, at 11:15PM, an anonymous phone call was received saying there would be “an explosion in fifteen minutes” in Grand Central Terminal. Police closed off the main waiting room and searched 1,150 lockers over two hours. No bomb was found.
On Thursday, May 5, 1955, the Times reported “SIX BOMBS THREATS KEEP POLICE MOVING”. Police investigated Macy’s department store on Herald Square, where a “woman shopper” found a note on a sales table saying a time bomb set for 5:35 PM was under the table. The note was signed “Rocky.”

At 4:12 in the afternoon, a man telephoned Police Headquarters and said that a bomb was “ready to go off” at the Roxy Theatre, 7th Avenue and 50th Street. Police investigated and found no bomb.

A porter at the First National City Bank branch at Canal and Broadway received a call about a bomb after banking hours. He called the Secret Service who called the FBI who called the NYPD. No bomb was found.

Once again, Radio City Music Hall received a bomb threat, claiming a bomb was set to explode at 11PM. Uniformed police searched the theatre, moving through the audience with flashlights while the movie continued.

On August 12, 1955, a bombing once again made the front page of the Times. For the first time, a bylined reporter, Lawrence O’Kane covered the story, and for the first time a bomb was linked to 22 others.

As the Times reported: “The bomb’s characteristics and the method by which it had been placed identified it as the work of a mysterious bomb-planter for whom the police have been searching since 1940.

“This was the twenty-third bomb in the fifteen-year period bearing the same criminal hallmarks, according to Inspector Edward F. Fagan, in charge of the Bureau of Technical Services….”

John Sena, an upholsterer employed by the Roxy Theatre, was checking all 5,869 seats in the theatre for rips and tears. He found a damaged seat and took it to the basement. At 3:30 PM, as 2,000 people in the Roxy watched Bette Davis in “Virgin Queen,” Sena began to repair the seat.

As he tilted his workbench, a length of pipe encased in blue cotton fell out. The police were contacted and various high-ranking officers sped to the seen, along with an emergency truck, the bomb squad and various detectives.

United Press International picked up the story of the Roxy bomb and was much more lurid in its details. “Dismantling Bomb Placed By Maniac” they headlined, calling the bomber a “madman.”

At 6:05 PM, the Times reported, the bomb disposal truck took the device to 12th Avenue and 52nd Street. Later, when traffic was lighter, it was taken to Fort Tilden, Queens where it was stored in a bunker until it could be X-rayed and examined.

Roughly two months later, a bomb once-again exploded in a New York theater, this time, the Paramount. The Times said it was the “24th of Its Kind Placed in City”.

This time the blast occurred in a sixteenth-row seat, which struck William Jones, a 37-year-old pharmacist’s helper, in the right foot.

The bomb squad described the explosive as “a piece of iron pipe about three inches long and two inches wide, containing a small watch and an electric light….The upholstery of the seat had been cut and the bomb inserted. A small, ivory-handled penknife, apparently used for the cutting, was found inside the upholstery.”

The final blast of the year was reported on Friday, December 2, 1955 in a small, below-the-fold article. “CRUDE BOMB SET OFF” it read.
The article, about 120-words in length, reported that a home-made bomb exploded in Grand Central Terminal at 5:05 on December 1. 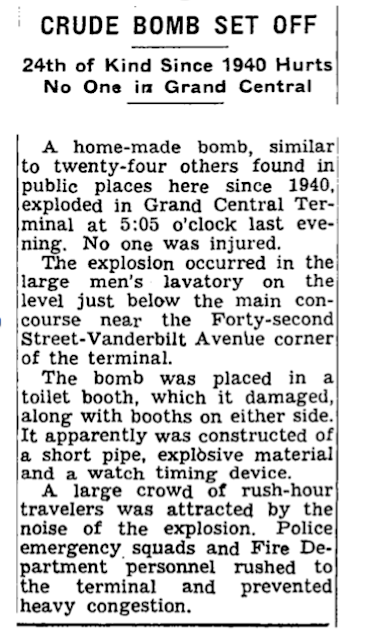 The Times said, “the explosion occurred in the large men’s lavatory on the level just below the main concourse…” near the 42nd and Vanderbilt Avenue corner of the building.

The bomb “was placed in a toilet booth, which it damaged…”

Posted by george tannenbaum at 3:50 PM