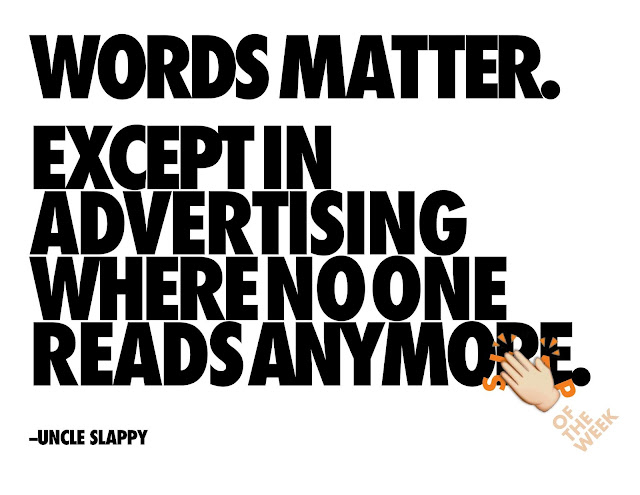 Of all the dispiriting trends our industry has subjected itself to since the rise of digital communications, the one that probably bothers me most is when clients, fellow creatives, account people, planners and others ad nauseam assert that no one reads anymore. (They never present data to back up their assertion. They just proclaim it as fact.)

Right now, all over the news--regardless of which media channel is delivering that news--everyone and his cousin seems to be saying, "Words matter."

When the gunman in El Paso says “this attack is a response to the Hispanic invasion of Texas,” you can't semantically separate that statement from previous statements from president Trump that our nation is being "invaded" and "infested" from our southern border. If you say it's raining, it's reasonable to assume that at least some people will pack an umbrella. If you say we're being invaded, people will start shooting.

--
Yet over the 35 years of my career I've rarely gone a week where I haven't been told to shorten my copy because "nobody reads anymore."

Of course we have forgotten, utterly and completely, the words of Howard Gossage: "People read what interests them and sometimes it's an ad."

Or as my friend, and CEO of TBWA\Chiat\Day New York, Rob Schwartz has stated in our recent podcast together, "The secret to winning new business: Clients buy words. Whenever we didn't win a pitch, it's cause we didn't have that set of words that when you're not in the room, the clients say, 'well, they came up with that great set of words.'"

However, despite all that, the daily verbal currency of ad agencies today is that there are too many words, we write too much, and no one can read.

I'm not buying it. (And if you've read this far, theoretically, neither are you.) So here's my plea to copywriters, and agency people everywhere, and clients too--if you want good work.

Stop disparaging words.
Stop saying the copy's too long.
Stop saying words don't matter.
That no one has the time.
Stop being less good than you are.

Become a champion of the well-written.
The clear.
The funny.
The charming.
The persuasive.
The genuine.
The moving.
The logical.
The intelligent.
The provocative.
The thoughtful.

Believe in what we do. In what you do.
Believe in the power we have. The power you have.
Not just to win awards and build careers for ourselves,
but to make fundamental and important differences in
the business of our clients.

To make a difference where differences matter.
Words play a major part in that.

Naive on my part, I know.
But let's share beautifully-expressed thoughts the same way we share memes or the latest water-cooler-gabbery about the latest cable zombie-fest.

Let's believe in the power of what we do.
Because what we do has no power if we don't believe.


Posted by george tannenbaum at 5:18 AM