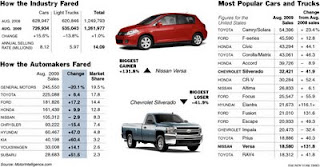 It's not the cars that are clunkers, it's the industry.

It started mostly as a rumination on the calcification of Detroit and how Madison Avenue, which in many ways grew up to service Detroit, was following Motor City on the road to perdition. That is out-moded hierarchies, committees, ways of doing business--and most important a medieval media world-view--were spreading wide swaths of destruction up and down the storied boulevard. Most of the old-line agencies have waded into the tar-pits (and once las cucharachas entran pero no puedan salir) and new media agencies have yet to belly up to the bar, to mature to the point where they've become anything more than flashgicians.

So what about the "Big Three" or what should now be called "The medium-sized one and its two bankrupt brothers." Can government infusions of cash and vast consumer incentives save the auto industry in the U.S. Likewise, will the eventual upturns in ad spending save Madison Avenue?

The answer, I'm sad to say, is no. Auto sales did rebound, but only just. (They were up a whopping 1% over August, 2008.) And GM's sales were down over 20% while Chrysler's plummeted over 15%. Folks, they were giving cars away and no one bought them.

Here's the thing. Plain and simple. Indisputable. And germane to Advertising and Autos. It's not the cars that are the clunkers, it's the way business is done. GM, by all accounts, have dramatically improved their quality and design. The things that are keeping people away from GM showrooms are lack of trust, shoddy bait-and-switch negotiating tactics and the same drab marketing that shows the same cars on the same roads with the same smiling people driving them.

OK. Maybe I'm not being totally clear. So let me try a metaphor. First, let's agree that the world has never moved as rapidly as it does today. This has always been true and until we hit another Dark Ages is probably a safe bet. But open a word doc and type in these words--words that are fairly eminent (though not 'new') in our world today: blog wiki facebook skype linux google ebay. Each one will be underscored in red because Microsoft's embedded dictionary hasn't kept pace with our language. And lest you think this is a MSFT issue alone, the same words will be marked as mis-spelled when you type them in blogspot, which is a Google property. In other words, the world is moving--companies are not.

Maybe I'm in a shitty mood because the Ad Contrarian is on a month-long hiatus. Maybe my endorphins are low today. Maybe I'm troubled about Brad and Angelina.

Or maybe I'm seeing companies hoping to return to the past rather than facing the future. You know, societal darkness at noon.
Posted by george tannenbaum at 8:39 AM

How does one go about changing an industry that sees the past as ancient, decrepit news and the future as some neo-marketing experiment where communication takes a back seat?

Everybody's jumping on some new bandwagon or other, but no one's checked to see if the driver's a complete lunatic.

Teenie, I call that
"BMWaR Syndrome."

Blind man with a rifle syndrome.