If there were a trade campaign for the advertising industry. 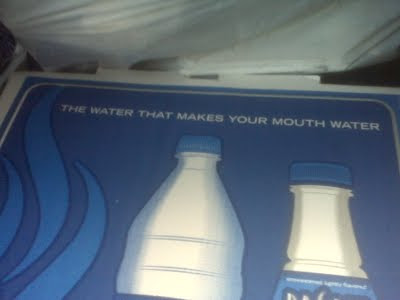 I suppose it's always been easy to decry the state of our industry. But maybe lately it's gotten even more decry-able. And by that I mean things have become even dumber than they'd ordinarily become if they just trended alongside the inevitable downward slope of our so-called civilization.

No, I'm not talking about Bud with lime and their paean to sodomy, "I like it in the can." Dumb, tasteless, rude and pandering to absolutely the lowest and basest instincts in the world. That's dumb, but I suppose I can accept it because it doesn't pretend to be or try to be anything else.

But this morning on my way to work, I saw two separate pizza boxes with an ad for Coca-Cola's Dasani water on the box. I was so stunned by the stupidity of the headline that I had to stop and take a picture of it.

Let's think about those words. Here's a water that makes your mouth water. Isn't that by definition what water does? Are the folks at Coke implying that other water leaves your mouth dry and arid? I just don't understand.

I'm sure it's hard to come up with a unique selling proposition for water. And hard to convey a distinctive look on a pizza box. But say something. Do something unusual, unexpected, funny or daft. Barring that, how's this for Dasani's next headline: "The one water with two parts of hydrogen for every single part of oxygen."
Posted by george tannenbaum at 8:14 AM

the cute little water nymphs are writing them...and everyone knows their pens aren't waterproof...forgettable, replaceable, and why the business thrives.