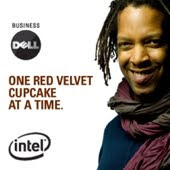 I think I read the following in "Ogilvy on Advertising," and I always remembered it and often think of it. It goes something like this:

I think about this as Dell has launched its new small business campaign that employs the oh-so-innovative use of--get this--real customers!

I'll admit, working on Dell, like working on almost anything else, is a challenge. But surely there has to be something more interesting than a portrait of a customer with a quasi-crafted line that no person would actually say.

Maybe the phrase "permission to believe" is as out-moded as the gender-specificity in the poem above. But seriously, why should I believe that Dell computers are worth considering because someone I don't know and who has no credibility with me endorses them? "Oh," I can hear an agency or client shill mouthing, "but look how interesting this person is. They make theatrical drapery."

Listen, there's an Asian-owned Jewish deli in my neighborhood that posts polaroids of its customers on its back wall. There's the obligatory ones of Mike Bloomberg, Regis Philbin, local sports stars and then there are shots of ordinary people like my wife. My point is simple if you have a million customers, some are bound to be interesting. I don't know anyone who says "Mike Bloomberg has his picture on the wall, their lox must be good."

I wish Dell luck with their new ad campaign. Maybe some people somewhere will find it motivating. As for me, it would work harder if they offered free lox samples for visiting their website.
Posted by george tannenbaum at 9:36 AM

I know who that guy is (vaguely)... he's a cook on the Food Network, owns a bakery in D.C. or somesuch. So maybe we're supposed to get some face-recognition out of it that's supposed to enhance it.

But more than the quasi-crafted line and what a lovely drapery he is and some in the know (whoo-hoo) will recognize him, even, is what does the line have to do with selling computers?

I totally don't get it, but I might have to hop down and get a cupcake now.

BTW to contradict slightly... down here in Philly we have two rival cheesesteak huts that are world-famous. And while I wouldn't say that anyone chooses Geno's over Pat's because Geno has the Shecky Green photo, people do go to both in part to ogle at the walls full of other people who've stained their shirts with the greasy hoagies.

No lox. No ordinary folks on the walls, either, LOL.