No one knows anything. 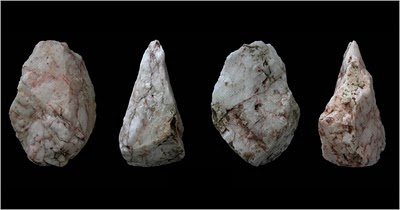 If you read the news assiduously, you begin to understand that knowledge and facts are mutable things. About once a month, it seems there's a finding that shakes the rafters of conventional wisdom.

Today in The New York Times http://www.nytimes.com/2010/02/16/science/16archeo.html?hpw scientists revealed that ancient mankind has been going to sea "much longer than they had expected." Like hundreds of thousands of years longer.

Upon discovering some ancient stone tools on Crete, a scientist remarked: “We were flummoxed,” Dr. Runnels said in an interview. “These things were just not supposed to be there.”

Of course in advertising there are legions who believe that the world makes sense. If, say, you "make the logo bigger," then your brand awareness will improve.

In other words, people in advertising and elsewhere tend to create tidy little universes for themselves in which everything makes sense, where perceptions and realities align and where there is a neat causality between actions and reactions.

Unfortunately life--not theory--is much more random, much more full of surprises. In fact my guess is, the more orderly you attempt to make your universe, the more out of step you become with actual reality.

I've quoted Czeslaw Milosz before and I will probably cite him again. If only because the epigram below seems to make so much sense:

"When someone is honestly 55% right, that's very good and there's no use wrangling. And if someone is 60% right, it's wonderful, it's great luck, and let him thank God. But what's to be said about 75% right? Wise people say this is suspicious. Well, and what about 100% right? Whoever says he's 100% right is a fanatic, a thug, and the worst kind of rascal."
Posted by george tannenbaum at 7:25 AM

Oh, crap, I've been finding those pointy stones all over the place. All my life. Once, on a particularly bad Saturday morning a while back, one of those pointy stones was stuck in my head. It hurt. Also, I had no idea they were a trillion years old. Weapons? Who, that old, would want to kill me? Now? While I was asleep? I never hurt anyone back then. As far as I can remember. Actually, I just found traces of a 850 000 years old tribe of hebrews here on the shores of NJ. They made fluffy bagels people paid ten cents for three for to threw on bottles in Ashbury Park's amusement parks. The holes where actually smaller than the necks of the bottles so the outcome was guaranteed. Wall Street has ever since used the same technique extracting every penny possible from the American public and its government. Now, before anyone accuses me of being an anti semite I'd like to point out the fact that I'm Jewish, and the guys in Ashbury Park, back then, misappropriated our bagel recipe. Other than that we've always found somewhat pointy stones whenever we went out in the sticks or to a museum.
Either place seem to work.
However, they don't have clear plaques in the woods, so you don't really know if you're looking at a million years old pointy stone or really a million years old pointy stone.