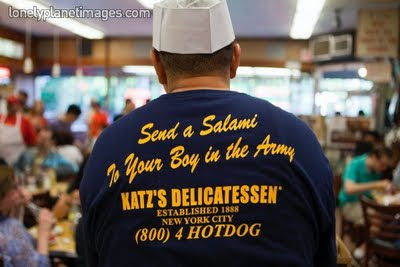 I went to the opera again last night, the great opera "Rigoletto" by Giuseppe Verdi. There are still people who dress for the opera, there is a smattering of opulence, gowns and tuxedos. But most people are coming straight from work and they're wearing their work clothing, whether that's a business suit or a pair of jeans and a t-shirt. It's nice seeing the semiotics of dress at the opera, the "to-each-his-own-ness" which is one of the things that makes New York different and wonderful.

The best poetry of the evening came not from Verdi's score or from the libretto, it came from the back of a t-shirt that a heavy-set older man was wearing. The t-shirt was advertising Katz's Deli, the deli that was famous for decades before the famous orgasm scene from "When Harry Met Sally" made it even more famous. In fact, their famous t-shirts were emblazoned with a bit of anti-war ironic sloganeering that I remember from my youth.

The t-shirt had an old siphon seltzer bottle on the front, with a big "Katz's" in ornate script. And on the back, the famous words "Send a salami to your boy in the army." For me, growing up in the late '60s and early '70s, during the American carnage in Viet Nam, those words were as powerful and loaded as Country Joe and the Fish's "I Feel Like I'm Fixin' to Die."

"Well come on all of you big strong men, Uncle Sam needs your help again,
he got himself in a terrible jam, way down yonder in Vietnam,
put down your books and pick up a gun, we're gunna have a whole lotta fun.

"now come on wall street don't be slow, why man this's war a-go-go,
there's plenty good money to be made, supplyin' the army with the tools of the trade,
just hope and pray that when they drop the bomb, they drop it on the Vietcong.

"now come on generals lets move fast, your big chance is here at last.
nite you go out and get those reds cuz the only good commie is one thats dead,
you know that peace can only be won, when you blow em all to kingdom come.

"now come on mothers throughout the land, pack your boys off to vietnam,
come on fathers don't hesitate, send your sons off before its too late,
be the first one on your block, to have your boy come home in a box."

Not the point of the evening, and it didn't overshadow the incredible aria "La Dona Mobile," but where my head went, at least for a while.
Posted by george tannenbaum at 7:17 AM

George,
I remember the vin de table in Katz's deli during that era was Dr Brown's Cel Ray soda.

George, you're having flash backs. Clearly you didn't take Owsley tabs but the low grade stuff. Or shrooms.

Dave, they still sell Dr. Brown's in NY and in Katz's. I'm not a cel-ray fan, and since I'm watching my weight I stay off Dr. Brown's amazing Cream Soda. But my wife and I do get seltzer delivered to our home in the old-fashioned siphon bottles.

Anonymous, I need no artificial ingredients to have flashbacks. As JM Barrie said, "God gave us memory so that we might have roses in December."

For Californians, you can find Dr. Brown's Cel-Ray at Genova's Italian Deli on Telegraph in Oakland. (Also, the best artichoke torta ever.)

One more thing: I always thought the "Send a salami..." thing was from WWII. Is this not true?

Another more thing: It always bothered me that "Send a salami to your boy in the army" doesn't quite rhyme. I bet it bothered you too, Geo.

"This is the song that some of the boys sang as they went bravely off to World War III:

So long, mom,
I'm off to drop the bomb,
So don't wait up for me.
But while you swelter
Down there in your shelter
You can see me
On your TV.

While we're attacking frontally
Watch Brinkally and Huntally
Describing contrapuntally
The cities we have lost.
No need for you to miss a minute of the agonizing holocaust. Yeah!

Little Johnny Jones, he was a US pilot,
And no shrinking violet was he.
He was mighty proud when World War III was declared.
He wasn't scared, no siree!

And this is what he said on
His way to Armageddon:

So long, mom,
I'm off to drop the bomb,
So don't wait up for me.
But though I may roam,
I'll come back to my home
Although it may be
A pile of debris.

Remember, mommy,
I'm off to get a commie,
So send me a salami
And try to smile somehow.
I'll look for you when the war is over,
An hour and a half from now!"

George,
This is a coincidence, I wrote about the same Country Joe song the week before you did.
What are the odds?
http://community.brandrepublic.com/blogs/dtb/archive/2011/04/26/interuption-is-content-not-media.aspx

Dave, it must have entered my subconscious somehow.

George,
Shows what a great song it was.
I remember waiting on campus at Pratt to go on the protest march in DC.
A lot of the guys had just got beat up on another protest march by the workers on the WTC.
The song playing over and over was Country Joe.
Nowadays, on any film or programme about Vietnam, you never hear it.
They only ever play The Stones or The Doors.

We were under the influence of our parents then. It seemed wrong, somehow. And saying aloud, the word "damn" was notorious. We could get our mouths washed out with soap.

The world was crazy all of a sudden. Going from watching John Wayne in "The Green Beret" to hearing Country Joe.

Nursing Assistant Courses Spokane Wa They are on-call and can be reached by phone. Something not everyone is cut out for. Many nurses will work in a clinic or doctors office setting.