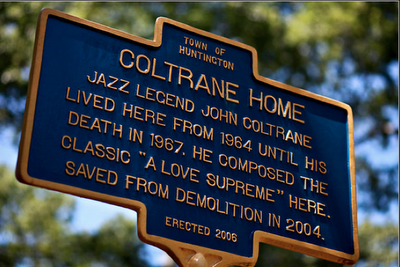 There was an article and a wonderful slide show in Sunday's "New York Times," on the house in which jazz great John Coltrane wrote "A Love Supreme." You can read, and see the whole thing here, http://www.nytimes.com/2011/07/03/opinion/sunday/03sun4.html?scp=2&sq=john%20coltrane&st=cse but I thought I'd pick out a few sentences from a particularly well-written article.

"There is a ranch house out in the middle of Long Island, just south of the expressway in Dix Hills, where the saxophonist John Coltrane lived, started a family and composed “A Love Supreme” in the spare bedroom. The album is a hymn of praise and thanksgiving by a man who found peace and God after alcohol and heroin. It is the work that helped make Coltrane a jazz immortal.

"While it will live on, the house is another story. It has been empty about seven years. The bricks are crumbling. The raccoons have been evicted, but not the termites. Lexan panels cover the windows; a fan blows futilely to keep down the mold. That’s about as far as the restoration goes."

As our industry spends its energy chasing awards, it's worth thinking about the mutability and transitory-ness of what we do.

Our work, with one or two exceptions that perhaps break in to popular culture, will not last. Our houses will not turn into shrines.

The best we can do is do our best. Comport ourselves with integrity. Listen well and try to do well for our clients, our agencies and ourselves. Also, we can try to be mensches. Help young people. Help them get jobs. Help them learn.

A friend of mine wrote me about a year ago. She knew I had worked for Hall of Famer Ron Rosenfeld. She was in a second-hand store in Williamsburg and stumbled upon an old corrugated box full of his ancient awards. Did I want them?

They were being sold for a dollar each.
Posted by george tannenbaum at 7:24 AM

Dusty awards for a buck each.
That just about says it all.

George, do you remember, "Me and Ron can do a campaign in seven minutes."

Todd, we will not see their likes again.