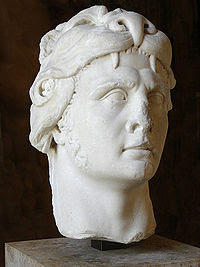 King Mithradates was a Pontic king who lived from 134 BC-63 BC, at which point he was killed by the Romans. Mithradates was a pretty crafty guy. It wasn't unusual for his fellow kings, in those days, to be poisoned. By their rivals, by enemies, by their kids, wives or concubines. Poisoning was all the rage and because of it, Kings did not generally live very long.

Mithradates hit upon the notion early on of taking a bit of a variety of poisons everyday. Before people understood toxicities and vaccinations and modern medicine, Mithradates was inuring himself from poisoning. He was building up his ability to withstand the real stuff in real doses when his number was called.

I think about Mithradates a lot.

Maybe if I watch five seconds of a shitty commercial everyday, if I sit through three minutes of fuck-stupid meetings, when my day of reckoning comes I will be able to withstand it.
Posted by george tannenbaum at 3:33 PM

Please don't withstand it. Or you'll be just like the rest of them.

Hemlock George? You sound like you want to go out atop a flaming pyre?

what doesnt kill you makes you stronger they say. but oh my can it be exhausting.

Whatever you do, just leave the Arsenic out of your daily dose of Mithradatium