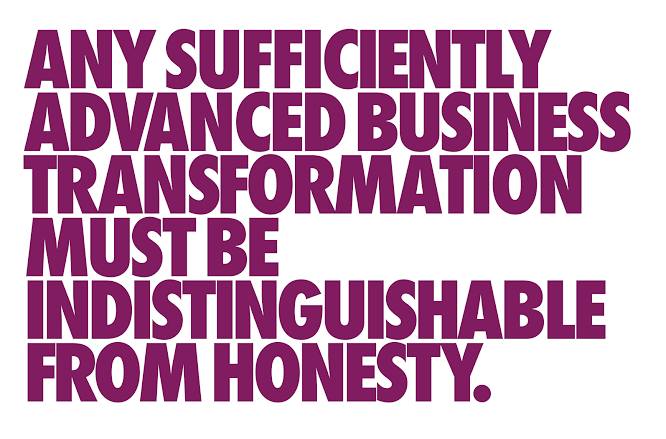 Today, you can't hardly spit without hearing something about business transformation, or transforming business models, or upsetting the dominant complacency, or the status quo or disrupting the disruptive disrupters.

We hear about businesses being "Uber'd." or "Peloton'd" or "Apple'd" or "Virgin'd." We hear about it so much, sometimes I think my head is going to fall off. Because, frankly, for all we hear about how much this or that will change everything, to my jaded baby-blues, just about everything universally sucks.

Now that American business and much of our political/liar class is blaming the lack of service whether you're trying to buy a bagel and a cuppa in the morning, a new phone, or just about anything, on the laziness of the American worker. I'd go so far as to say despite all the inflated claims of business transformation, everything sucks worse than ever before.

Everything takes longer (a kayak I bought for my wife's birthday over a month ago isn't expected to arrive for another eight weeks.) Everyone is rude ("you took the wrong cup if you want iced-coffee.) Everyone takes advantage of you. (New York is having elections in a week and every candidate from Mayor to Comptroller feels they have the right to text you.) And everything is spelled wrong (I'll be getting my heir cut later.)

I don't know what, for all the blather about disruption and/or business transformation has actually happened that's good for people, not giant companies.

As I do so often when I get in one of these near-constant moods, I turn to George Orwell and I make a leap.

Orwell wrote this: "In a time of universal deceit, telling the truth is a revolutionary act."

For the purposes of this post, I'm going to equate "business transformation/disruption" with Orwell's locution "revolutionary act."

What are business transformation and disruption if they're not revolutionary?

So, here's my thought about business transformation and disruption. If you want to do them/make them/enact them, here's where to start. Not with data collection, not with greater surveillance capitalism, not with better retargeting, or two-factor authentication.

Start with the absolute basics of being a human. ("Corporations are people, my friends," as neo-Fascist Mitt Romney asserted.)

Start with making a promise to the people you serve and actually serving them.

Start by telling the truth.

Start by eliminating footnotes, codicils and "terms and conditions."

That probably means training staff, so when somebody says, "where's the filo dough?" you walk them over to the freezer case instead of pointing. That probably means paying people so you can retain them, so they actually stick around long enough to know some answers.

Start by showing up on time. If you run an agency and have a call scheduled with the client at 10, everyone must be in the room and the line must be open by 9:57.

Start by rewarding people for jobs well done. And customers, too, for their business. With real value not bonus miles that are worth nothing and then expire.

Start by not talking about personal empowerment until you stop employing slave labor.

Start by not talking about climate change until you clean up the mess you generate.

Start by not talking about how great you are until you treat your employees great.

Start by remembering you're in business to serve--not to reward yourself and fuck others.

Start by, in sum, telling the truth.

And tell the truth.

Real transformation, not just bad service under the see-through guise of "efficiency"?

Of course being human might cut into short-term profit. Some years ago before the knowledge of the horrors of surveillance capitalism were widely noticed, I suggested my client stop collecting data and retargeting people with ads.

My guess is that the damage that nastiness did was greater than 64 clicks per 100,000 views purportedly gained.