I am spending 12 hours in the San Francisco suburbs. Seeing a client and the person gracious enough to help me manage my business without killing me.

I don't know anything about the town of Corte Madera, except it appears to be forty-five parking lots with 700 stores adjacent. Of course, the weather is beautiful, the cars are German and the place is crawling with bare midriffs that summon the insistent trumpets of lust, even in an old man like myself.

A lesson here--and there are many--is don't for a second think that language anymore communicates.

I order a sandwich from the Hispanic woman whose job it is to make sandwiches.

ME:  With balsamic vinegar.

Then, after we've found the balsamic,

Then at the checkout.

HER:   You have a Safeway value card?

ME: No, I have a Dangerousway value card.

Lesson two: Everyone is over-specialized.

There's a Container Store. A wrap store. A salad store. A sriracha fried chicken store, a sandwich on a pretzel store, and about nine stores that specialize in generic coffee.

What I wouldn't give for the whole world to be run like a New York City Greek diner in 1975. You can get anything you want, fast, and the prices are reasonable. Even when it's raining buckets, you can get a turkey burger deluxe delivered before you have time to hang up the phone.

Would that some political candidate would start the Angus Burger party. Fast. Fresh. Efficient. Affordable. For all. Take it from me, the world would be a better place.

Third, for me, is that no one knows any history.

I hear Corte Madera, and I think of Francesco I. Madero, a reform candidate who defeated Porfirio Diaz in the Mexican Presidential election of 1911. The stadium in Saltillo where I played so long ago was named after Madero.

My notebooks, tell the story this way:

"When Porfirio Diaz was the king and had sold our land and our resources and our peasants and our oil and our railroads to the Americanos. 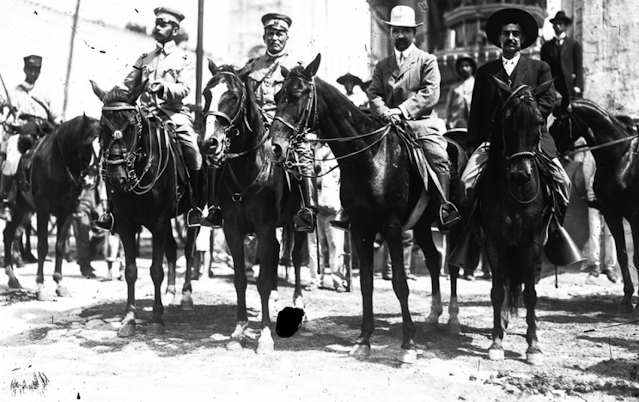 From the peasants they took. To the rich they gave.
Like el Norte today.

"As Diaz's soldiers killed the Zapatistas. And Madero's soldiers shot back. And the US helped Diaz shoot back with even more machine guns because the American money insisted, and bodies were piled high in the streets and the dead outnumbered the living, all because of the love of a filthy buck.

"Francesco was gunned down. Shot I believe in the back of the neck and left to be eaten by dogs in the sun. One million others died as well. Died trying to live. One million. And the nation's population was probably around 20 million at the time. That's five-percent. The equivalent of 18 million Americans dying today."

Like most of the United States, California was stolen. All the sun and surf and tacos and bitchin' blondes. First stolen from the first peoples by the Spaniards, and then stolen by the Americans.

We done good with all this stealing.

It's made us the greatest nation on the face of the Earth.

These are the things I think of, while sitting by the pool at the Best Western.

You gotta crack a lot of eggs to make a California.

And a sadder, but more poetical take:

LINES FROM CALIFORNIAby Arthur MillerThey meet for purchase or saleand to trace their bounds through rosebushes.There is a catechism: What's your name, whatdo you do, how do you feel, and where you from?Like people on a perpetual cruise, and the deadgo overboard into a lawn. It's a deck,part of which is always on fire.Anything inconsequential makes them serious.Some teach parakeets to climb ladders; they alsohave Malted Milk Specialists.Tragedy is when you lose your boat.Life is a preparation for retirement.The sun is good for business.Al Jolson left a trust fund which paysto floodlight his tomb at night forever;even in death a man should have bills.The second-largest industry is sporting goods.To succeed as a woman you have to have a car.California is Christianity plus the conveniences.Driving from town to town one wonders what willhappen if neon gas ever runs out; some mayhave to learn to read paint.When a man admits failure he becomes a pedestrian.Brotherhood is when two men have the same mother.Sacrifice is a car sold at a ridiculous price.Society is when people listen to classical music;or a Savings & Loan.Law is order, Justice a decent return on money.Progress is anything turning on and off by itself.Beauty is teeth, deep skill, and the willingness.Freedom is the right to live among your own kind.A philosophy is a keen sense of land valuesand the patience to wait.War is peace waged by other means.They know they are the Future.They are exceedingly well-armed.