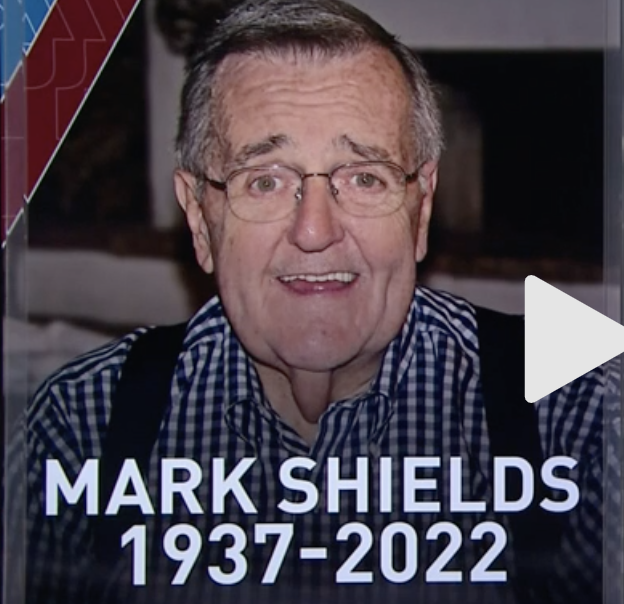 The journalist and political analyst Mark Shields died the other day and as he was a part of my life for so many election cycles, I read his New York Times' obituary with some froth. You can read it here. (And btw, if you don't sent the Times money for a subscription, you're pissing me off. The $100 or $200 they ask for is the least you can do to protect the remaining cat-hairs of our democracy.)

Shields was not a hoity-toity analyst. I liked him because he was down-to-(scorched)-earth and spoke a language that was colorful, full of allusions and descriptive. It was from him that I learned the longshoreman's phrase for a brouhaha, melee or imbroglio. Shields likened knives-out political infighting as "a Pier Six brawl." The etymology doesn't matter. The vividness of the language does. You understand it--it's evocative--whether or not you know its derivation.

Shields was graduated from the University of Notre Dame in 1959. And rather than being drafted (no foot-pain would excuse him) he enlisted as a Marine, emerging two years later as a Lance Corporal. That sound like a non-commissioned officer in charge of boils. But I think, even at the age of 23 or 24, he was probably leading boys and preparing them to combat America's foes, real or imagined.

The obituary states, "He learned a lot in those two years ...including concepts of leadership encapsulated in a Marine tradition of officers not being fed until their subordinates were."

He went on and asked,"'Would not our country be a more just and human place, if the brass of Wall Street and Washington and executive suites believed that ‘officers eat last’?”

On shoots, agencies--and even clients--have always been trained to let crews eat first. After all, crews are working while we're eating yet another handful of Raisinettes. But I wonder how many agency and holding company heads would, at least semiotically, adopt the notion of not being fed until their staffs are.

The world, and agencies and holding companies are just a microcosm, have become every man for himself, widows and children be damned. Sure a few $22 million per annum executives suspended their salaries during the depths of the trumpian covid calamity. But they paid themselves back, often times, in spades.

But I wonder if setting up a code of behaviors where employee welfare superseded executive largess would begin to change the prevailing dynamic of an industry which is having a terrible time attracting and retaining talent. We are more populated by cake-eaters like Marie Antoinette than people who put their people first.

"Women and children first," has been replaced by first-class lifeboats replete with French champagne, lie-flat life-preservers and "warmed nuts." The hell with those making the moghuls of the business rich.

As Emma Lazurus wrote, you and I, friends, are just "the wretched refuse on these teeming shores." While the big brass collects lifetime sinecures and $50 million pay packages, you have to fight for an extra-week of severance when they fire you after 26 years, for having aged.

So much of life is ruled by semiotics. The language of signs.

When John Thain, the trillion-dollar banker bought for his office a $61,000 wastebasket, you knew Merrill Lynch was in trouble. A friend of mine, a writer was at Ogilvy for 25 years or so. Often you'd see him in the mens' room, antiseptically picking up old newspapers people left behind. Semiotically, he showed his care and love for the place. They fired him. No one else saw it.

The Greeks believed that the greatest sin, hubris was quickly followed by the greatest torment, nemesis. In Hogarth's time, or Dickens' we might have called the notion, "getting your comeuppance."

Maybe comeuppance or nemesis or even quid quo pro are old-fashioned, even obsolete notions. I'm not a Christian but I had always heard how hard it was for a rich man to get to heaven. I'm not sure anyone hears about camels or needles or even kindness and caring today.

I also don't know what the corporate equivalent would be of allowing enlisted personnel to eat first. Would it mean giving the rank-and-file compensation before shareholders? Or is the way to improve shareholder value really to undervalue the people doing the work?

Posted by george tannenbaum at 8:13 AM