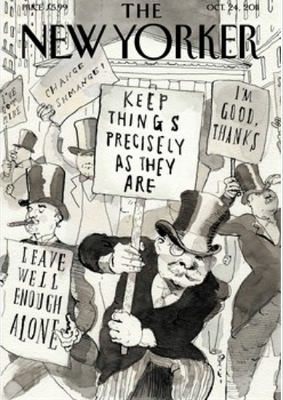 If you've read your history or, even, your literature, you'd know that protests like Occupy Wall Street rarely, if ever, make a difference.

The government supported malefactors of great wealth, those who have built a system of socialism for the mega-wealthy and brutal Darwinian capitalism for the wretched refuse, simply have their drivers roll-up their darkly-tinted windows, crank the climate-control and drive home to their 17-room apartments on Park Avenue or their 25-acre estates bordered by sea-water and golf-courses in Rye.

Milling about a privately-owned park policed by public servants who are against the public will have little or no effect on the bloated plutocrats.

Most people, in fact, don't understand the real economics of our "trickle-down" economy, in which average CEO pay is something on the order of 400 times that of an ordinary worker. Money isn't printed to pay people that much. Rather than hire 400 workers, we give their money to CEOs. All that money those millionaire 24-year-old investment bankers make comes from somewhere. It comes from you.

Each morning as I walk to work I pass a giant inflated rat that serves as a union protest against union-busting at a national hotel chain. A century ago unions didn't inflate urethane rodents. They wrapped lead pipes in newspaper and bashed people over the head. Two centuries ago, factory workers in France threw their wooden shoes, their sabots, into the gears of the machines they slaved over, sabotage.

We can't, of course, do as Thoreau did, 165 years or so ago and not pay our taxes. Our taxes are taken from us automatically.

We don't, I don't, even know how to rail against the world.

This is from Nicholas Kristof in Sunday's "Times."

"According to the C.I.A.’s own ranking of countries by income inequality, the United States is more unequal a society than either Tunisia or Egypt.

"¶The 400 wealthiest Americans have a greater combined net worth than the bottom 150 million Americans.

"¶In the Bush expansion from 2002 to 2007, 65 percent of economic gains went to the richest 1 percent."
--
As a counter-balance to all this gloom, I have posted 4:45 minutes of what may be the most beautiful movie ever shot. "The Umbrellas of Cherbourg.
Posted by george tannenbaum at 9:15 AM