On death and dying. 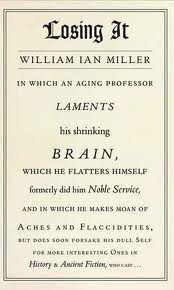 I am reading right now a book by William Ian Miller, a professor of Law at the University of Michigan Law School. It's called "LOSING IT in which an aging professor LAMENTS his shrinking BRAIN which he flatters himself formerly did him Noble Service ***
A Plaint, tragi-comical, historical, vengeful, sometimes satirical and thankful in six parts, if his Memory does yet serve."

I began reading the book before Steve Jobs died. It seems even more relevant after his death.

I have nothing to add about Jobs. I never worked with him though many of my past colleagues had.

Nevertheless his untimely demise recalled to mind this, by A.E. Housman. Jobs, it seems to me, was an athlete who died young.

To An Athlete Dying Young

THE time you won your town the race
We chaired you through the market-place;
Man and boy stood cheering by,
And home we brought you shoulder-high.

To-day, the road all runners come,
Shoulder-high we bring you home,
And set you at your threshold down,
Townsman of a stiller town.

Smart lad, to slip betimes away
From fields where glory does not stay,
And early though the laurel grows
It withers quicker than the rose.

Eyes the shady night has shut
Cannot see the record cut,
And silence sounds no worse than cheers
After earth has stopped the ears:

Now you will not swell the rout
Of lads that wore their honours out,
Runners whom renown outran
And the name died before the man.

So set, before its echoes fade,
The fleet foot on the sill of shade,
And hold to the low lintel up
The still-defended challenge-cup.

And round that early-laurelled head
Will flock to gaze the strengthless dead,
And find unwithered on its curls
The garland briefer than a girl's.
Posted by george tannenbaum at 9:28 AM