From whence I come. 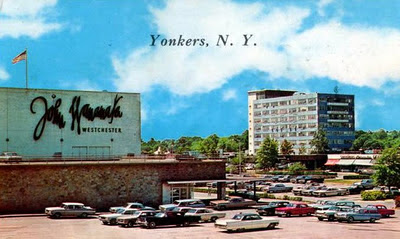 I was born, almost 54 years ago in a hospital that was in one of America's first malls, an outdoor agglomeration of small shops and branches of department stores called Cross County Center. Cross County Hospital was a six-story blue-brick building in the center of things. I don't know why they put a hospital in the middle of a mall, but in any event it's where I was born, and where my sister emerged two years later.

Cross County Center was just over the New York City line in Yonkers, New York. Yonkers was a city exploding with post-war growth and had surged to become New York's fourth largest municipality, after New York City, Buffalo and Rochester.

Yonkers was, and is, a place riven by segregation. An underclass of black families had moved into the downtown areas. The working class neighborhoods began to diminish as small factories began to shutter as factories moved to cheaper labor in the south. More affluent families began moving into large homes on the fringes.

Yonkers at the time of my youth was heavily Italian. There was a unique way the Italian boys had of calling after girls that I learned to mimic. I can still effect the effect if pressed or drunk.
Posted by george tannenbaum at 8:40 PM

George, since your birthplace is immortalised in Ella Fitzgerald's song 'Manhattan", perhaps you can elnighten me on something that's puzzled me for years.
What are 'whiles' and 'Chiles'?
"We'll go to Yonkers
Where true love conquers
In the whiles
And starve together dear, in Chiles"

I think they mean "Child's" which until fairly recently was a chain of restaurants in New York.

Gershwin wrote, by the way...

Who cares what the public chatters?
Love's the only thing that matters!
Who cares
If the sky cares to fall in the sea?
Who cares what banks fail in Yonkers
Long as you've got a kiss that conquers?
Why should I care?
Life is one long jubilee,
So long as I care for you
And You care for me!

ALL:
If the sky cares to fall in the sea?
Who cares what banks fail in Yonkers
Long as you've got a kiss that conquers?
Why should I care?
Life is one long jubilee,
So long as I care for you
And You care for me!

Yup, just checked it George and you're right.
The Rogers and Hart version rhymes 'wilds' with 'Childs'.
Seems they and Gershwin can only think of 'conquers' to rhyme with Yonkers though.

Yonkers, Dave, is an Americanization of Junkers, the German nobility. And Thornton Wilder, the great American playwright wrote "The Merchant of Yonkers," which was Broadway-ized into "Hello Dolly."