A night at the Tempus Fugit.

I'm not much of a drinker. In fact, I now drink less in a year than I used to in a single evening back when I was a teenager. Nevertheless, I find myself more and more often sitting on a leather-covered stool and leaning on a liver-colored bar and soaking in the atmosphere at the Tempus Fugit.

The bar itself is behind those aforementioned reinforced steel doors, down a long cinder-blocked hallway and a half-flight of steps. Then you go through another door, and there it is.

The Tempus Fugit is a small place. I paced it out and it's just a foot or two wider than my actual living room, which is 13'x20'. Along the far 13' is the bar. And along one 20' are four or five tables for four. Their chairs are mis-matched. And most of the table legs have a match-book crammed underneath them to stop with the ricketing. That said, no one seems to mind. Stability isn't all it's cracked up to be.

Over the bar is an old neon sign advertising "Pike's Ale. The Ale that Won for Yale." A beer that hasn't been sold legitimately since the brewery sold its oasts (that's a kiln for drying hops) way back in 1963. The Tempus Fugit firmly believes that Pike's Ale was the finest brew ever brewed and bought out their stock when the brewery went (beer) belly up. There are dozens of kegs in a back room. All of Pike's Ale. 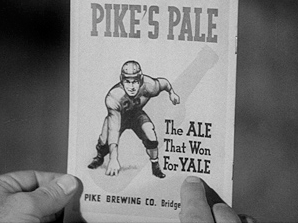 There's a brewery in Seattle called Pike's that currently sells a Pale Ale. No relation.

I walked up to the Tempus Fugit with Whiskey, my 11-month-old golden retriever. I had spent much of the afternoon visiting my oldest friend, Fred, who's incarcerated in Memorial Sloan Kettering Hospital with a rare blood cancer. We don't talk about death when we are together. We talk about life. Like me Fred is only 55. We're all hoping he makes it to 56.

Seeing a friend of 42 years with tubes in him can take something out of you. So after I left Fred, I dropped by my apartment, picked up Whiskey and headed up to the Tempus Fugit. It's about 20 minutes from my place.

Whiskey lay down at the foot of my stool. The dour but efficient bartender quickly brought her a wooden bowl filled with water. She lapped at it exactly twice then dozed, as she often does when she is not on the hunt. The bartender, now back at his station, drew me a Pike's Ale in a short 8-oz. glass.

I don't know about you, but my two cents says beer should never be had in a glass that's larger than 8-ounces. It gets warm and flat and is generally less satisfying. They know things like this in few places anymore. They never forgot them at the Tempus Fugit.

"You know the thing about Beethoven," the bartender began.

Oddly I had had Beethoven's "Eroica" running through my head all afternoon.

"Through gloom and despair and darkness and deafness, he worked. He worked and worked."

Another Pike's Ale appeared before me.

"When Napoleon's armies were besieging Vienna, Beethoven's hearing was already fragile. He thought the concussions of the explosions would destroy finally what remained of his hearing. He moved to his brother's basement and worked and worked and worked."

He refilled my bowl with nuts and slid over a big urn with pickled hard-boiled eggs. Then he continued.

I slid a twenty across the bar to the bartender.

And I left for home.


Posted by george tannenbaum at 8:30 PM

I'm gone to tell my little brother, that he should also pay a quick visit this blog on regular basis to obtain updated from most recent news.

Thanks, Dave. That means a lot to me coming from you.