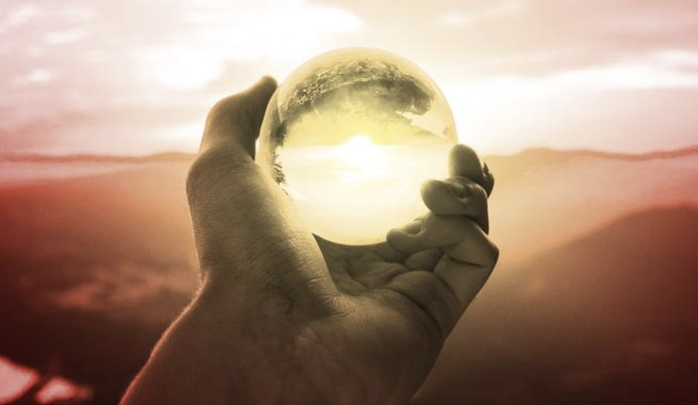 01. You will click on hundreds of articles like this one. Apparently enticed by the thought of a man holding one glass testicle at the rim of the Grand Canyon.

02. You will wonder when the holding of one glass testicle at the rim of the Grand Canyon became a metaphor for prognostication. Or, more likely, 2021.

03. You will wonder if HR, the Holding Company's Chief Risk Officer or the Global Chief Genital Officer have issued a 33-page POV in ALL CAPS on using the word testicle.

04. QR codes will be back. In a big way. Just ask the people who profit from QR codes. They've created a 68-page white paper, downloadable through a QR code.

05. Everything old is new again. This means absolutely nothing. Therefore it had to be said, because after all, less is more and form follows function.

06. It's all about HUMANING. Oh, and in the agency world, when you create words like humaning, FIRINGING usually follows.

08. In the wake of continued economic stagnation and negative growth, the size of the average holding company CEO's Cannes' yacht rental will decrease from 127' to 122'.

09. Agencies will continue to have employees "Work From Home." They won't continue, however, having employees.

11. Agency C-level bonuses, due to rent decreases, will be higher than ever. Even higher than the savings in rent.

12. A fistfight in the halls. A fusillade of fists when a Worldwide CCO is called 'the Global CCO,' by the North American CCO.

13. In an effort to return to his roots, Martin Sorrell will buy Gary Vaynerchuk, once he realizes the V-man is made solely of wire, paper and, mostly, plastic.

14. Adweek will run a major expose on Agency diversity. Revealing that 94% of the people of color in agencies are Chief Diversity Officers.

15. The end of late nights. New York State Attorney General, Letitia James will go after the ad industry for forcing employees to work 80-90 hour weeks without additional compensation. "I've spoken to some of the people," James said. "They're mostly 12 and 13-years old. And it's past their bedtime."

16. Marcel does it again. The AI that's is bringing the Publicis Groupeeee "The Power of 7/8ths," develops "the time fitted-sheet." An AI-powered custom timesheet system that took seven years and $21 million to create. Holding Company Marcelbator, Arthur Sadoun, said in a 728-minute video statement, "Nothing."

18. Award shows proliferate. Including "The Award-ies." The first award show that recognizes and honors award-show entries.

21.5. We will continue not to be above cheap shots.

Posted by george tannenbaum at 5:37 AM