This might be dumb. And it's almost certainly too-heavy for a Friday.

He, I believe, started the modern trend of hating the business you're supposed to be leading. He and the hordes of Grover Norquist government-hating people decided the best thing to do--if you're only out for yourself, if you don't care about others and if you fundamentally believe the end-times are coming--is to "starve the beast." The beast being government.

Reagan was the leader of our government but kept asserting that government is fundamentally evil. If you're sentient, you may remember this bon mot.

Unfortunately, for about the last twenty years, I've seen a similar "I hate what I do for a living" sensibility in advertising.
I've seen people who walk around believing that advertising makes people buy things they don't want or need. That advertising is a moral succubus. And that being in the field at all--though it's paying your rent and for your $375 sunglasses--is some sort of soul-selling evil that leads inevitably to public displays of self-hatred.

If you're embarrassed or ashamed to be in anything--a relationship, a career, a group or an agency--leave already. And don't look back.

It is this very self-hate and industry-wide self-abnegation that's led to the demotion and denigration of what we do. Accordingly, in my lifetime, I've seen the entire industry transform from the greatest creator of wealth and greatest propagator of brand-values to a procurement diminished "cost center."

This is directly related to advertising today being a business run by people who actually despise the business.

It's being run by accountants. Insurance people. Operations bots. Professional penny-pinchers. Or communications plumbers working on improving the efficiency of popular annoyance rather than leveraging creativity to sell things.

It's being run by cynics. People who know the price of everything and the value of nothing.

I played baseball for a living 46 years ago. I've followed the sport for more than 55 years. I've seen what happens to teams that no longer believe in themselves, teams that believe they fundamentally can't play the game. Eventually, they can't.

I don't want to jinx anything, but since I was ignominiously booted from Ogilvy at 4:30 in the afternoon nearly 11 months ago, though I was making their c-level money hand-over-fist, I have created GeorgeCo., a Delaware Company.

I'm exaggerating, of course, but 91% of my internal fiber believes that I might have, already, outstripped my former Alma Mater in revenue. I know my work is better. I know my client relationships are better. I know I'm winning more new business. And my client roster might be more august as well. All this and I am a one-man boat.

I wonder when S4 Capital will call.

I say this not to boast. But to make a point.

Success--in anything--starts, builds and is sustained by belief and enthusiasm. You have to believe in the value and importance of what you do.

Most of all: You have to love it.

If I got kicked in the head by a horse and began interviewing to return to the agency business, or if I were a client looking for a creative partner, or if I were deciding whether or not to accept a client, I'd first assess a few things. Mostly if the people and companies I was thinking of working with actually loved the business. I'd have them answer a few questions before I made a move.

Scribbled here for your convenience and larceny. 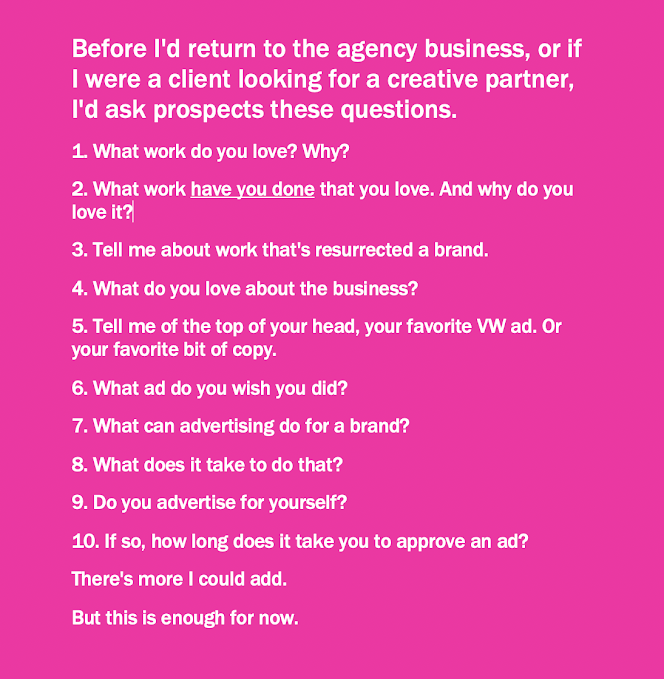 Posted by george tannenbaum at 7:02 AM