Of soup, botulism, bodegas and the obvious.

My mien, I'll admit, runs to the lugubrious.

While I never give up and have always seem to stand and dust myself off after having been knocked down by a brush-back pitch to my chin, I am inclined to see the glass more, much more, than half empty.

Much of me has gone through life like Rafael Sabatini's Scaramouche. I was "born with the gift of laughter and a sense that the world was mad."

You can combine that aspect with that of Melville's Ishmael. I often find myself "growing grim about the mouth." And even on the sunniest of days, it's not unusual to find me with a "damp, drizzly November in my soul."

Lately, when I think about the Holding Company-eviscerated advertising business--a business that had provided for various branches of my family--dozens of people--for more than three-quarters of a century, I find myself thinking about soup.

When I was an early teenager, say back in 1971, the Food and Drug Administration issued a public warning. A Westchester County man died--his wife became seriously ill--from botulism after eating the contents of a can of Bon Vivant vichyssoise soup.

More than one-million cans of soup were recalled. Five were contaminated with botulism and Bon Vivant's Newark, NJ plant was closed forever.

That's when soup rode up on me, like a bad case of acid-reflux.

It occurred to me that our entire industry is like a can of soup. Specifically, a tainted can of soup. Like a can you open, pour into a pan and find, disgustingly, a rat's foot inside.

Since I started GeorgeCo., a Delaware Company, my views on the importance of our industry have been confirmed. Without having solicited a single piece of business, dozens of companies have found me.

I can divide the assignments I get into three groups. If I were still working in an agency, someone would call those groups "buckets," because the word bucket is ugly and a cliche. But nonetheless, I get three kinds of assignments.

1. An agency calls me. They need some help. On a pitch. In a crunch.

3. A client calls me. They send me approximately 32-thousand pages of badly-designed powerpoint and then they weep on the phone. "George," they confess like a saved man on his way to the electric chair, "no one knows who we are. And we don't know what we sell and what makes us different. We need your help."

It's not unusual for me to get a dozen notes like this a month. 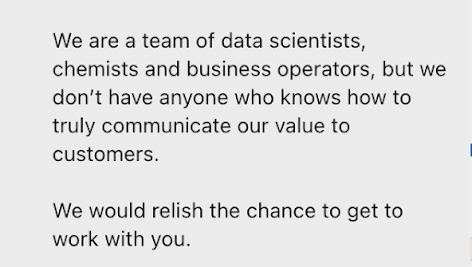 This is an actual note from someone I never met.

The agency business, in its current state of self-immolation, has forgotten its reason for being.

In an effort to grab a constant flow of client dimes--and pay-off the Holding Company extorted "protection-money," we have reduced what we do to the equivalent of a huge plastic cistern of Dubble Bubble gum next to the cash register at a run-down bodega with a worn formica countertop.

The industry has decided to sell small, unnecessary crap at point-of-sale for small amounts of money that, even in aggregate, are of little consequence.

The industry is trying to support its huge, bloated corporate infrastructure by earning revenue two-cents at-a-time.

The industry--and the Vulture Capitalist accountants who run the holding companies--just want to hear cash-registers ring. The industry's deportment reminds me of the back-asswards attitude of "entrepreneurs" and "visionaries" in the tech world before the dot-com bubble burst around 2001.

We lose money on everything we sell, but we make it up in volume.

IPG in the same year claimed over 54,000 employees.

I'll be blunt as a haymaker. You can't feed all those employees a piece of bubble gum at a time. And clients themselves will not occupy a prominent place in the gray-matter of consumers unless they do something big, prominent and important.

The biggest, most-vital thing a creative person, or an agency, can do is to help a company figure out who they are, what they sell and why.

If you can do that with wit, simplicity and in a manner people will remember and talk about, the world--such as it is--will beat a path to your door. As so many have found the stone path leading to my rickety seaside cottage in Connecticut.

It's early Saturday morning as I write this. The sky is still dark. The rain is steady and mean.

Whiskey is on the sofa with me. Dried off from her walk. Struggling to keep her puppy eyes open. More Carrera than canine.

I realize when I write posts like this, that I am giving things away. I, with seven-figure-revenue, am telling a multi-billion dollar industry how to become, again, relevant.

I can feel my wife shooting daggers at me.

"Why do you tell them your secrets?" she shivs.

I sip a sip of her nearly-famous viscous black coffee and then I sip another sip. 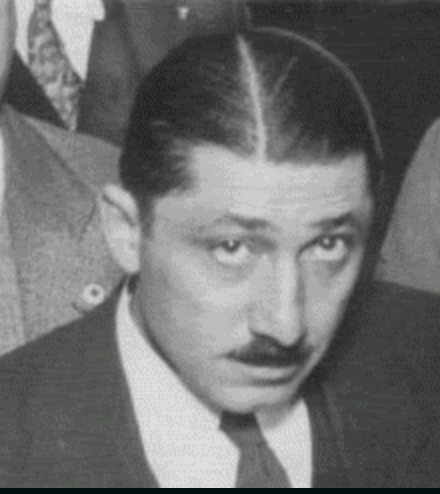 Frank Nitti, Capone's second-in-command,
would just as soon castrate you with a rusty grapefruit knife as kiss his mother.
Today he would be a CFO.

"If they don't, the Holding Company accountant-CEOs will come down on them like Frank Nitti squeezing in an iron vise the scrotum of a small-time yegg in Al Capone's Chicago.

"Besides they're too busy selling Dubble Bubble. And soup. With a side botulism and rat foot."