I'm having a break-down.

I get a lot of notes like the one above.

They're not all from people as talented and kind and prolific as Dave Dye (if you're not reading his Stuff From the Loft--particularly his series on 'The Women Who Built DDB'--you are depriving yourself of a valuable advertising education.

I've never been a fan of advertising schools. Partly because I think there's more to be learned--faster and cheaper and better--from people like Dave and Dave Trott and Bob Hoffman and Rich Siegel, but....)

But forgive the meander.

I get a lot of notes or calls or whatevers from people saying "how do you do it?" And frankly, I don't know.

But often when I am stuck, which is often, whether with work or with this space, I break things down into smaller parts.

Over the years, I've seen many people almost literally paralyzed with performance anxiety. They have some copy due tomorrow--or TV-spots or headlines or a website and they can't budge.

When I am faced with such fears, I turn to the calculator in my head.

A TV spot is really just :27 seconds--you can knock off the last three seconds for the logo and tag. And these days most 30-second spots don't have more than 12-15 seconds of copy in them. At about two-words-a-second, you're worrying about writing between 25 and 30 words.

It's pretty much the same thing with this blog. I've written about 6100 posts since I started this 14 years ago. About 410 posts a year. At about 300 words a post, that's just under two-million words.

That might sound like a lot. But again, if you break it down, it's only 41 words an hour for an eight-hour day. That's two words every three minutes. That's not too hard.

My two cents is that too much anxiety is built up around making something for the ages. When we should just be focused on making something. Eventually, if you're lucky, the ages will come.

Actually, that's not 100% true. I usually say something more vulgar, like "we'll all be more productive if we're pissing in the same pool." I hand them the spot and we've got something to work from. It's usually pretty productive. We have the core of the idea settled. Now we work on making it better.

With this blog, it's the same thing. I start with an idea.

It doesn't have to be the god equation or a rumination on nature vs. nurture. It just has to be something that caused a synapse. Then I write about that synapse. As quickly as I can. And I put it away.

Usually, I check back with it--like I check back with all my work--ten or twelve times during the day. I suppose bakers do this with dough. Is it rising ok? And fisherpeople do it with chum lines. You don't have to do anything drastic. Just see if there are any adjustments you can make.

I don't work on any grand thesis or theme. I just write about something that hit me.

This morning I saw this ad. It's one of the better ads I've seen in a very long time.

First of all, it's honest. Which is unusual.

Second, it's full of facts about the shoes--I learned, for instance, that these come in 1/4-sizes for better fit. That makes me think the people who make the shoes are obsessed with the little things that make a difference. All of a sudden I've thought more about a brand of shoes I've never heard of than anything shoe I actually own.

I don't need willowy models draped over each other looking like they're about to fuck their eyeballs out to sell me a shoe. I don't need lines like "We shoe." Or meaningless words like "pamper," and "indulge," or "supple."

Just break things down for me. 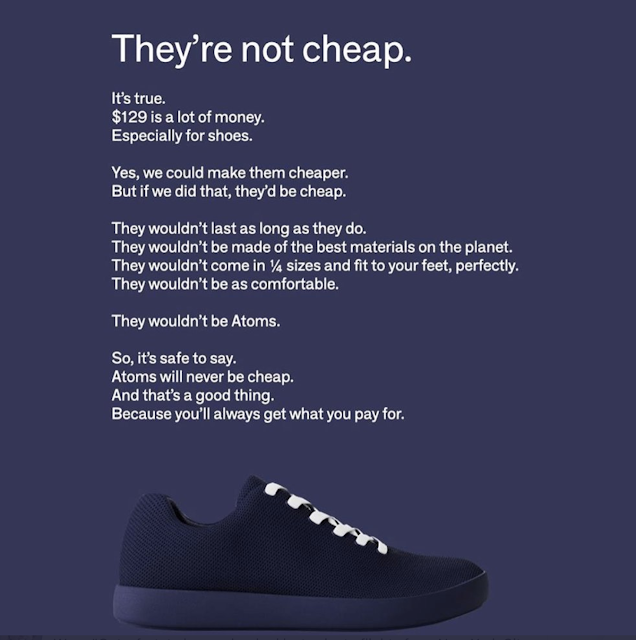