On Sunday mornings, more often than not, my old-man's bladder conspires with my aging puppy, and I am awake at 4:57 for some quiet time with Whiskey.

We refurnished our new house about six-months ago with new, expensive furniture covered in new, expensive fabrics. About two-months ago, the furniture arrived. Three weeks later, a throw from the Orvis catalog showed up, and Whiskey is laying on it now, comfortably at my side, her deep eyes fighting against re-sleep as I type this.

My little horse must think it queer,
To stop without a farmhouse near.

Whiskey must think it queer
That I type with her tusch so near.

That I wake up before the sun, feed her, and then type one-handed, using my right mitt for petting purposes.

Like the rest of the world, Whiskey has had a helluva year. She was diagnosed with cancer about 12 months ago. But, America is still America when it's science-based--still one of the great countries on earth--and we found a battery of doctors who have treated her with as much acuity and intelligence as love and tenderness.

She's still a puppy--like me, she refuses to give in to being an old dog--but, like me, only for about 45 minutes a day. Those are the minutes she is guided primarily by her enthusiasms and lust for life. When she runs on the beach and through the water after an apple section I've hurled into the distance, torn rotator-cuff be damned. 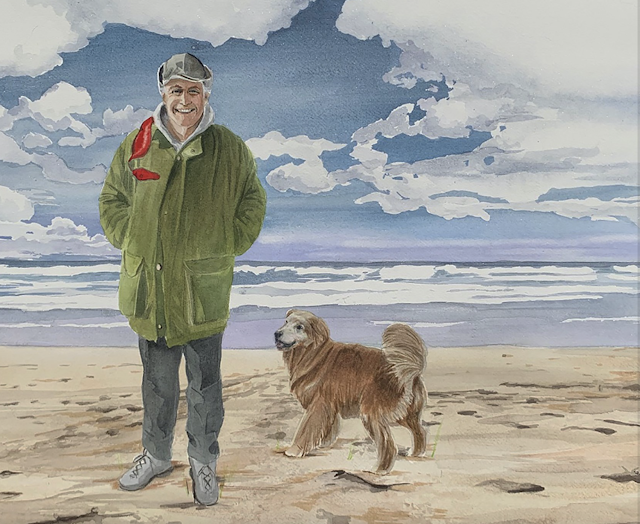 Whiskey gallops after it, charging like Red Grange, aka the Galloping Ghost, and splashes or swims through the shallows of low-tide for her kill. Or she chases after the duck decoy I have with me always, and hurl with the wind a Clemente, if not clement-like distance.

She returns to the sand, and digs and rolls over, making what my perspicacious spouse calls "sand angels." But it is Whiskey, as well as my wife, who is the angel. Beings filled with joys--not oys--and laughter and smiles.

We walk, when the sea is out, in the sand flats, crossing small rivulets of the receding surf and finding uninhabited islands for Whiskey to claim--with an apple or a duck--with me as her man Friday. She sniffs at a lonely clam or some seaweed or on occasion will beat me to the carcass of a once-was fish and have herself a sushi forschpice, bones and scales and all.

The aging dog in both of us sometimes makes us tired. Yesterday, after we returned from the sea, she lay on our hardwood and barely moved for the rest of the day--and was creaky like Gary Cooper or a mechanical toy when she did.

There are, I'll admit, as the LaGuardia of client jets seeks to land on my tarmac, days when I sit alongside Whiskey--my wife has not yet demanded I too sit on a throw from Orvis--and think about my waning days. My eyes, blue to Whiskey's deep brown, seem to grow weighty and I wonder, "how long?" And "why?" And even, "no more."

The black is lifting now outside my windows. The songbirds are more insistent, and this post is nearly written.

It's quiet on Sunday mornings. Now, it's just the one-handed clatter of my keyboard, the ticking of an old clock on the mantle, Whiskey's deep breathing and the chirruping of a trillion birds.

No one, except for those birds has much get up and go, right now. They, as the adage goes, are out for their worms.

But I have things to do. As does Whisk. And in a moment or two, we will grab some sliced apples--Whiskey's favorite treat except for all the others--and we'll take a mile swing through my 1950s neighborhood.

I'll see a house now and again, lit by the glare and blare of a flatscreen. The bright colors of animation filling the set if kids are awake, or the chyron chaos of the 24-hour news cycle surely telling us of another mass-murder or slaying of a Black man by a cop, if a stupid grown-up is up and watching.

Whiskey and I turn our heads from the horror, and look to the sea.