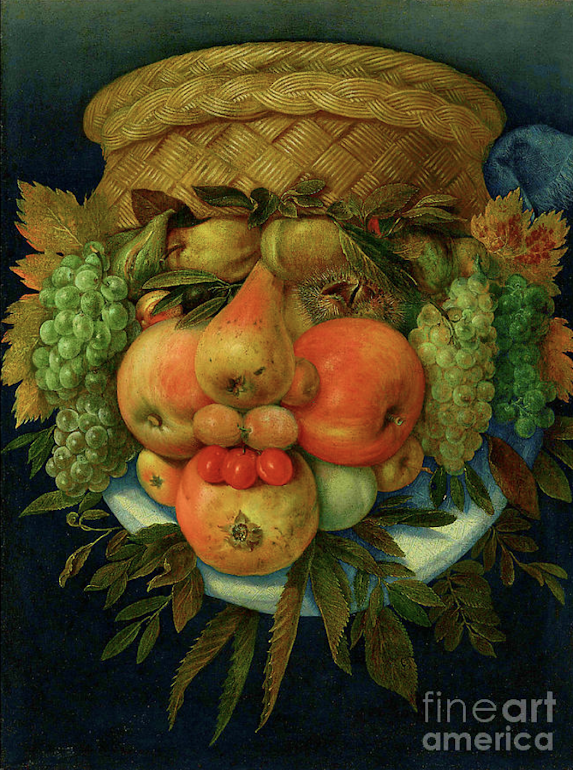 It occurred to me just now, if there isn't one already, there should be an American-Jewish, or Jewish-America short story titled, "Would You Like Some Fruit?"

The story takes place through the decades and features just two characters, coming together every few years or so, after some days, weeks or months of separation.

"Mom," says the 15-year-old child, looking pimply, haggard and wayward. "I got suspended from high school for smoking dope during band practice."

Six years go by and we are in the same linoleum kitchen, bursting with cheap dented aluminum pans and ragged books full of S&H Green Stamps.

"Mom," says the man-child dumping his duffle bag on the crooked floor. "I got kicked out of college for cheating on a bio test. Not in school, I'm open to the draft. They'll send me to Vietnam."

Again, some years elapse, the long-haired boy, strung out and wearing torn fatigues with his rank's insignia ripped off, revealing in darker drab his ex-rank, arrives in the even-more run-down kitchen, "Mom, I've fragged my Looie, and I got hooked on smack in 'Nam."

And so it goes.

I wonder though, if this post has a point, if "Would you like some fruit?" has become the refrain of the modern ad agency and the world's modern marketing departments.

Some time ago I wrote something about a telco called Sprint. I haven't thought about Sprint since the last time I saw a track-meet on television. I suppose they've been merged out of existence, though their name and logo is probably still emblazoned on half-a-dozen or twenty midwestern football stadia.

In 2008, Ad Age reported, "Last week, Sprint reported a fourth-quarter loss of 683,000 postpaid customers, those billed monthly for service and who are considered the industry's most valued."

I wrote: Sprint lost almost 7,500 customers a day--despite having contracts with their customers that are 'Shylock-ian' in their rigidity. No advertising can fill a 'bucket' that leaks that quickly. Mr. Kelly [their CEO] has been canned because he was throwing money at advertising to continue to re-fill Sprint's leaking customer bucket. I've learned over the years that it costs five times as much to acquire a new customer as it does to retain one. Kelly's $1.2 billion of marketing spend should have been focused on treating consumers well.

The unsurpassed Dave Trott, wrote me a note not long ago:

"When AMV had to repitch for Sainsburys, they sat down and discussed the branding issues. How could they change the brand to attract more people into the store?

"It was depressing because the brief from the client was to increase Sainsbury’s turnover by £3 billion over the next 2 years. And however much you change the brand you’re not going to attract £3 billion of business away from your competitors.

'If we can increase the value of each store visit by an average £1.50 we’ll have increased revenue by £3 billion over 2 years, without attracting a single extra customer.'

"So Sainsbury's did a campaign featuring Jamie Oliver who demonstrated a recipe featuring something you probably hadn't tried: nutmeg, or aubergine, or courgette, or cinnamon.

Not long-ago I worked for a brand that had about 24 quarters or more of falling revenue and profits. I'm not a business-person and while I took more than my share of economics courses in college--and read John Maynard Keynes and Kenneth Galbraith for pleasure--quarter after quarter of falling revenue is not generally good for business. Yet 98% of the agency's response to that downward spiral was the equivalent of "Would you like some fruit?"

"We should shoot this with the Mosouffian Brothers. They have a really cool editorial style."

"Yes, our CEO was caught fucking sheep in a Mosque."

"We should shoot this with the Mosouffian Brothers. They have a really cool editorial style."

I'm not 100% sure what ad agencies do anymore. It seems we are selling cotton candy to the nutritionally-deprived, rather than providing real substantive sustenance.

I like commercials and banners and tweets as much as the next carbon-based algorithmic life-form but my sense, or GeorgeCo's sense is that there's more to marketing than making more creative.

There's a banana in the kitchen calling me.

Posted by george tannenbaum at 5:34 AM