In a blink of an eye, I went from working at one of the very biggest agencies in the world to leading the very smallest.

When a change of that magnitude happens, like when the temperature drops forty degrees in an hour, you ought to open your eyes and pay attention to the world around you. Because strange things often happen amid giant change. Or, at the very least, you can notice strange things when you're out looking for them.

Downsizing my agency cosmos, one thing I've noticed is kind of an ontological mind-fuck. Call it cognitive-dissonance on a grand scale.

Most small agencies try to pretend they're vast. They'll put Apple logos on their site, or Verizon, or P&G. They'll pretend they have international scope.

It reminds me a bit of going to a frat party when you're eighteen. Everyone's pretending to be something they're not.

Just about six months after I started GeorgeCo., LLC, a Delaware Company, I got a call from a pitch consultant. This was a very big deal for me.

My first call from a pitch consultant.

She asked me if I wanted to participate in a pitch for a large client against large global agencies, like FCB. Who in their right mind would say no? As the former CFO of Ogilvy once told me, "there's nothing bad you can say about revenue."

The pitch consultant told me that I should try to look big and established.

I said I'd rather say who I am. And that as someone with perhaps one of the ten or eight best networks in the business, I can pull together the right people to handle anything from fast-growing tech brands to America's largest anchovy and caper retailer, a company I'm working with currently, called saltoftheearth.com 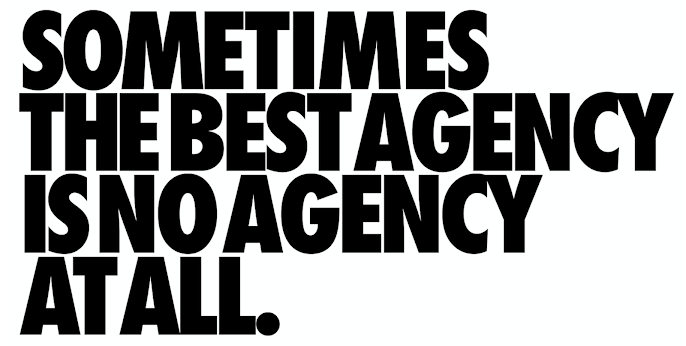 When I introduced myself and a planner to the client, I presented to them under the heading of the headline above.

In brief terms, it told them how we work and why we work that way. I ultimately got turned down by them because they thought I couldn't handle their complicated email programs, with hundreds of letters a week. But I got hired anyway to create their brand campaign and brand positioning. Which was better for me anyway.

Rightly or wrong, I decided to say who I was as honestly as I could. I'm one guy who knows a lot of good people, who's a fair judge of talent and who can build an agency around a clients' needs. I think I probably said "at too many agencies availability is a capability." They laughed at that, as people do, but I think it registered.

To plagiarize from Mae West: "It ain't the men in your life, it's the life in your men." Or something like that. The behemoth agencies, of course, often do the opposite. "The people in this room are your team," they'll say. "We're as agile as a Romanian gymnast." "We deliver borderless creativity." Or some other Newspeak mumbo-jumbo that people can see through like a Victoria's Secret model's negligee. Oooh lala.

I think it would be so much better for the integrity of our business if everybody going after clients would just stay in their swim lanes.

So if anyone from one of the Holding Companies is reading this, or anyone from S4 Capital, I have a deal for you.

I'll take the huge ones you can't handle.