I'll start with a quote by Groucho. 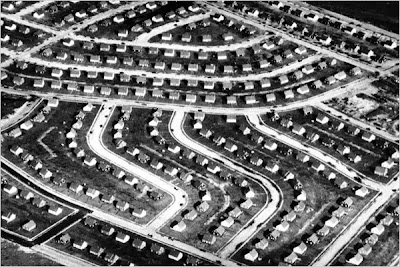 Let's start with the Catholic Church. It started with an idea. It started with simplicity and self-denial. Over time, you could argue, it grew into the mightiest religio-politico organization of all time, dominating the lives and thoughts of hundreds of millions and dozens of countries and principalities. It grew into perhaps the wealthiest institution of all time, engaged in, or turned a blind eye to evil on a small scale like simony, and evil on a large scale like the inquisition, the crusades and genocide that spread across at least two continents. It became an institution.

Switch now to Detroit. It started as a cauldron of innovation--from a technological, production and marketing point of view. Detroit did as much to change the world as the catholic church did. But then its institutional side kicked in. There mere size of the industry led to the replacement of innovators with bureaucrats. What was good for General Motors is good for the nation, people proclaimed. And so it all became about feeding the machine. Making more the measurement of better rather than better the measurement of better. The institution became about preserving the institution.

Which brings us to today and bail-outs.

Now, let's talk the advertising industry. Where to begin? What started as a few "men in a hurry," has become a receptacle of Microsoft meeting makers. We sit sit sit and think about how to make a successful meeting, how to do something that looks like someone else's innovation rather than innovating ourselves. We feed our own machine, churning out commercials whether or not anyone watches, writing last year's marketing for last year's products. We have become an institution.

Maybe I'm just in a bad mood.
Posted by george tannenbaum at 9:25 AM

It akes more people than ever to "write" an ad. I guess that means it's become an institution. And I wonder if Silicon Valley is going that way too?

I think Apple became an institution then Jobs came back and has institutionalized innovation.