The phrase that pays.

During World War II, London was repeatedly bombarded by bombs and rockets. Something like 40,000 citizens were killed and it wasn't unusual to spend the night crowded in an air-raid shelter.

In response to that, this poster went up all over Merrie Olde. 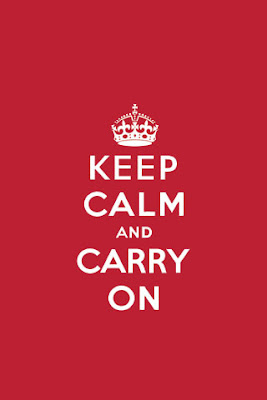 My tightly-gripped two cents says this is advice we all need to keep in mind. The industry (Ogilvy fired a reported 10% yesterday, a rumored 340 people)is contracting. The economy seems to be worsening. We can't do anything about that. What we can do is work hard. Don't let fear over-take us. Don't get down. And help your friends and neighbors. In other words, be a mensch.
Posted by george tannenbaum at 7:32 AM