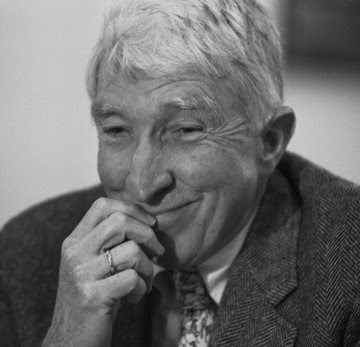 The great John Updike died yesterday. These are my remembrances from working with "Rabbit," as I dubbed him.

Back during the halcyon days of my career, when I was a bronze-Addy winning ACD on the ever-so-glam Gorton's Fish Sticks account, my partner (Craig--are you out there?) had had quite a run. First, we shot a spot with that rollicking Swede Ingmar Bergman (read about it here: http://adaged.blogspot.com/2007/07/ingmar-and-me.html. We followed that up with another Gorton's spot with the stickiest of all fish stick spokespeople, Bettie Page http://adaged.blogspot.com/2008/12/bettie-page-1923-2008.html.)

Now we were "tasked" (as account people like to say) with introducing a new line of Gourmet Gorton's fish sticks called "Gorton's Signature." I think it was Craig who said it: "Let's get perhaps the most notable literary signature of all. Let's get Updike." And so we did.

Off camera Updike was shy and laconic. But under the lights he was a pro. "Gorton's signature fish sticks," he intoned, "made from select filets of fresh--never frozen--young scrod." Then he signed his name ( in tartar sauce, a bit over-the-the-top for my taste, but that's show-biz) and said, "They're the only fish sticks good enough for Gorton's signature. And mine."

Big guy, rest in peace. You will be missed.
Posted by george tannenbaum at 7:11 AM

You have a lot to answer for my friend.

You and me both. We have no sacred bovines.