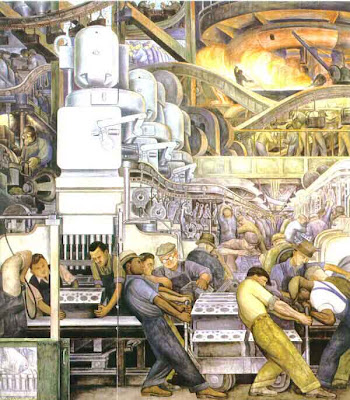 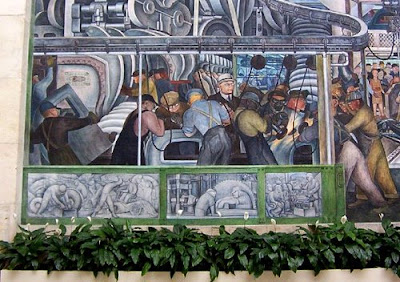 To the ultra-hip generation who are ruining the world because they're more concerned with ironic tee-shirts than nearly anything else, Diego Rivera is famous because he was married to a woman with one eyebrow.

To me, however, he was a person who cared deeply about people, power, progress and a few other p's. His work had a majesty and a point of view. It was both ancient and modern and therefore, timeless.

I am reading a book now about Henry Ford's attempt to vertically integrate his production as well as make the entire world a small, white, midwestern village with a church on the corner with young people dancing the quadrille. The book is called "Fordlandia" and tells the epic tale of Ford taking over a swath of Amazon jungle the size of Connecticut and trying to grow rubber there.

Anyhoo, this made me think of Rivera who was commissioned by Henry's son and arch-rival Edsel to paint murals at the Detroit Museum of Art which were to chronicle life in Ford's River Rouge cauldron or factory.

It's good to see pictures of people working. Since in advertising most of what we do
is pontificate and masturbate--by that I mean engage in self-gratifying behavior that does no good for anyone or any client.
Posted by george tannenbaum at 7:25 AM

I read an excerpt from Fordlandia somewhere last week and it gave me chills. Verrrry icky, but not out of step with the times. Maybe that's why it's so icky. I prefer to forget that even when I was a young'un things were so different as to be (nearly) unrecognizable, and step back a bit further and you get paternalistic insanity like Fordlandia.

Diego... yep. Scale has a lot to do with it, but glorifying and humanizing regular folks at the same time, making art available to the usuals, who have no idea this is how some people live, and available to those regular folks, giving them some dignity and awe at how important carrying their industry on their back is... big goals, well-carried-out. He had it going on (Frida notwithstanding). Good stuff.

Thanks for the culture, it's my daily dose.

totally agree with Jeaves. It's one of the blogs i find interesting. like a good book.

one the FEW blogs i find interesting, i thought i wrote but didn't...

Gorgeous.
Thanks for reminding me of him.
I saw alot of his work in Mexico city...

I just made an interactive puzzle about the restored Diego Rivera mural of the history of Mexico. If you have a sec, let me know what you think! Thanks! :)