As they used to do on "Dragnet." 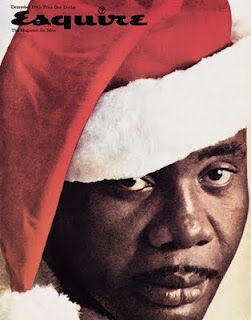 Stuffed into my paper New York Times this morning was a catalogue from Saks 5th Avenue department store that was beautiful and impactful. Except for the gigantic headline on the cover which read: "Better than fruitcake." (Despite the fact that Saks actually had a fruitcake for sale in the catalogue, tucked away on page 63.)

I know there are only so many places you can go when you have a Christmas theme to deal with. "Even Scrooge would approve." Something with Mrs. Claus for a change. Snowflakes! A reindeer joke.

But this catalogue is so defiantly uncreative it would put me off shopping at Saks even if I were in the market for a $22,000 watch.

46 years ago, George Lois did something different for a Christmas cover. He put heavyweight champion Sonny Liston as Santa on Esquire's cover. Esquire gained what today we would call huge WOM (word of mouth) and sold a shit-load of magazines. It was daring, controversial, unique, notorious, memorable and enduring.

Looking at the Saks catalogue makes me think that our entire world has been "beiged" to death.
Posted by george tannenbaum at 2:12 AM

the more cluttered the environment the more we're cluttering the objects in the hope they will stand out from the clutter....