Outside my window this morning and Iraq. 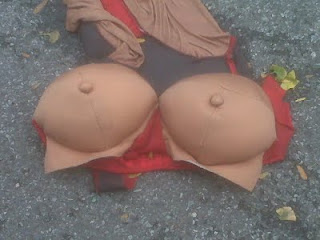 I opened a living-room window this morning to let a little air into the apartment after an unseasonably warm and humid yesterday and I saw the fragment of a halloween costume strewn on York Avenue. It was a pair of enormous naked plastic breasts with distended nipples.

I always wonder what goes on in the heads of the Chinese who manufacture such stupidity in their factories. What they must think of us and our values. They producing fake costume breasts cheaply so we can get drunk on an artificial holiday and then throw the petro-by-product costume away in the gutter where the trash man will pick it up and send it back to China as toxic landfill.

But today I also thought about other body parts. I am reading Pulitzer-winner David Finkel's new book "The Good Soldiers" on the war that makes no news that we are fighting in Iraq. Finkel brings you there. He brings you the filth, the corruption, the false promises, the lies, the stink, the fear, and most horrifying, the death and the amputations. He puts you in the turret of the under-armored Humvees where roadside bombs sever the limbs of American teenagers. They come home as stumps and we never see them.

We are watching Dancing With Stars or Brain-Damage-Ball (football) on a fascist-run network that propagated this war in blind allegiance to an un-elected military junta we called the Bush administration.

Imagine a pile of the limbs of the 30,000 American soldiers wounded and the almost 5,000 killed. Not to mention the millions or so affected Iraqis.

We have been taught by war movies that bullets and bombs leave little red holes in bodies. We don't see or read about arms flying through the air or heads being severed by shrapnel.

We're more concerned with fake boobs.
Posted by george tannenbaum at 8:24 AM