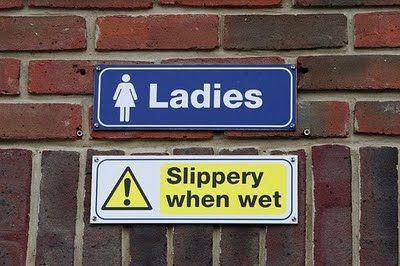 There's a road sign I noticed last night on my way back from Kennedy Airport. I've ridden this route a thousand times but I never noticed the sign before. The sign says "Wet Roadway".

It occurred to me last night that wetness on a roadway is usually a transitory condition not an on-going one. It's weird to put up a sign that says Wet Roadway unless there is something leaking somewhere. After all, the sign isn't put up when it rains and taken down when it's not raining. Therefore I conclude that rather than fixing a problem involving a leak somewhere, the highway department just stuck up a sign.

Somehow this got me thinking of advertising. Rather than create work that is compelling, we often throw up signs that telegraph what's about to happen. We follow a formula--ok, here's the product demo, here's the joke at the end, here's the button.

In other words, rather than doing something creative, we put up a sign that says "Creative" and hope for the best.
Posted by george tannenbaum at 7:55 AM