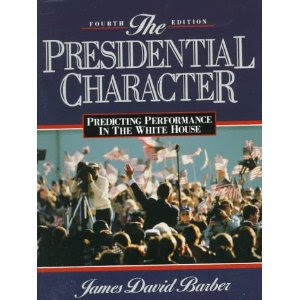 Many years ago, a Duke University historian, James David Barber wrote a book called "The Presidential Character" in which he categorized America's presidents into one of four groupings.

You get the idea.

It occurred to me tonight that both clients and agencies can be sorted in much the same manner.

Passive-Positive agencies wait for orders then do superior work.

Active-Negative agencies do big work for clients that tends to be strident and shrill.

Passive-Negative agencies do little and little that gets noticed.

Sure this is subjective, which agency fits into which category. But for me, there's value in thinking about the kind of clients you work for and the kind of agency.
Posted by george tannenbaum at 8:24 PM

Ad agencies are lead by people who rule by fear. Creative Directors demand that you do as you are told or you will be fired. Such leadership is more akin to a despot than what you allude to here.