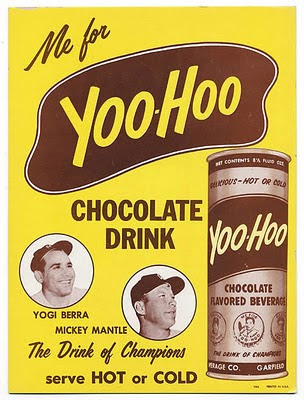 Of course through the years each of these institutions have been eaten by other institutions and the word trust is as antiquated a notion as the two-cent deposit bottle. (We used to find bottles after school and then run over to the Carvel in the neighborhood where you could buy a small cone for 17-cents. A "Brown Betty," a cone dipped in chocolate topping was eight cents or four bottles more. Which was usually out of our price range.)

Anyway, Bankers Trust had a slogan in those days, "There really is a banker at Bankers Trust." That was an era when you could put banker and trust in the same sentence and the appellation banker wasn't roughly equivalent to that of Adolph Eichmann, Director of Personnel.

In any event, I grew up seeing these banks and hearing these slogans. They were a part of my life, like the Hoffman's Soda jingle:

Girls, in fact, did look prettier sippin' Hoffman's through a straw but I debated which was the better slogan, Hoffman's or Cott's, who always proclaimed "It's Cott's to be good!" Then there was Yoo-Hoo who scored the coup of having Yogi Berra as a spokesperson. Though Yoo-Hoo never really caught on in my neighborhood--my gang were more Bosco drinkers. "Hey Roscoe, it's Bosco!"

In any event, it's my blog and they're my digressions. When I got to be around 15 I wrote a slogan for Irving Trust based on Bankers Trusts' slogan. "There really is an Irving at Irving Trust." That one never did catch on.
Posted by george tannenbaum at 9:12 PM

Their line I liked best from that period was their response to, "You've got a friend at Chase Manhattan".
They countered with "If you want a friend, get a dog. You'll find a banker at Bankers Trust".
That's New York writing.

There was another Hoffman soda jingle:

As you can imagine, my classmates made certain I was painfully aware of Hoffman soda jingles.

Well, when I was a kid, my father brought home an album of songs by Harry Ruby, "Songs My Mother Never Taught Me."

One of the songs was a faux college fight song called "Fight On for Tannenbaum" that went something like this:

In the foothills of Alaska/
Six or seven thousand miles from Nebraska/
There's a college by the name of Tannenbaum./
When the football season is here/
The students get together and cheer./
Fight, fight for Tannenbaum/
We're giving it all we got now for Tannenbaum/
It's 1,2,3,4,5,6,7,8,9 10enbaum.

Not exactly torture, but the best I can do.